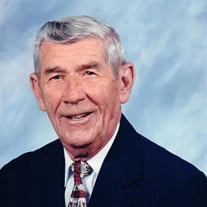 James E. Smith, Jr. 93 of Bluffton passed away at 6:43 a.m. on Friday, March 11, 2016, at Lutheran Hospital in Fort Wayne. He was born on July 6, 1922 in Indianapolis to James E. Smith, Sr. & Lorraine (Buckner) Smith. Jim graduated from Bluffton High School in 1941 and played as a guard on Bluffton’s undefeated football team of 1939. He served our country in the United States Navy from 1942 to 1945 and was discharged as an Electrician Mate -First Class. Jim worked at Davis Electric for 5 years in Bluffton before he started Smith Electric, where he worked for 19 years. He retired in 1988 after 20 years as the Director of Plant Management for the Caylor-Nickel Clinic. After retirement, Jim and Norma wintered in Bradenton, Florida for many years. He was a member of St. Mark’s Lutheran Church in Uniondale since 1945, was a long standing member of the board of directors for Bluffton Cemeteries, a past president of the Bluffton Rotary Club with perfect attendance and also served on the Wells County Alcohol Board for many years. Jim has been honored for being a 70 year member of the American Legion Post #111 of Bluffton and was. a member of the Bluffton Masonic Lodge for over 70 years. He was also a member of the Mizpah Shrine in Fort Wayne and served as a Cub Scout Leader. He was an avid golfer and loved to play at Hickory Hills, now the Green Valley Course. On June 29, 1944 in Indianapolis, Jim and Norma (Haflich) were married. They have celebrated over 72 years of marriage together. Survivors include his wife Norma of Bluffton along with two sons: Larry J. (Madge) Smith, D.V.M. of Berne and Ted K. (Susan) Smith of Bluffton and six grandchildren: Jenny (Bill) McIntire of Berne, Emilee (Elmer) Schwartz of Spencerville, Ohio, Theresa (Jason) Shuck of Geneva, Valerie Smith of Berne, Rachel (Nate) Cosner of Indianapolis and Phillip J. Smith of Bluffton and 9 great-grandchildren. He is also survived by four special nieces: Diana (Ned) Shappley of Lexington, Linda (Jim) Fritz of Bluffton, JoAnne (Ron) Bowman of Bluffton and Sylvia Solomon of Wilmington, N.C. Jim was preceded in death by two sisters: Marigrace Bohr and Leola Noel along with two grandchildren Brayden James Schwartz and Clayton Shuck. A service to Celebrate Jim’s life will be held at 10 a.m. on Monday, March 14, 2016, at St. Mark’s Lutheran Church in Uniondale. Rev. Richard Vonesh officiating. Calling hours will be held from 2 to 6 on Sunday at the Thoma/Rich, Lemler Funeral Home in Bluffton. Burial will follow at Fairview Cemetery in Bluffton. Memorials may be made to: St. Mark’s Lutheran Church, Family LifeCare, Christian Care Retirement Community or to Bluffton Cemeteries Perpetual Care Fund. Funeral arrangements have been entrusted to the care of the Thoma/Rich, Lemler Funeral Home in Bluffton. Friends can send online condolences to www.thomarich.com.

The family of James E. Smith, Jr. created this Life Tributes page to make it easy to share your memories.