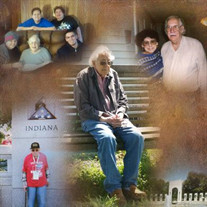 James E. Simmons, 87, of Bluffton, passed away Wednesday morning, May 30, 2018, at Bluffton Regional Medical Center. Jim was born on May 16, 1931 in Edinburg, Indiana to Robert Simmons and Edna Ruth (Mathis) Simmons. Jim graduated from Mount Summit High School in 1950. On October 1, 1951, Jim joined the Air Force fighting for our freedom. Jim was married to Emma Banks in 1955, for 8 months prior to her death. He married Francis Powell in 1968, and they had a son Robert Allen Simmons on June 7, 1970. Francis passed away in July 1970. Jim returned to Indiana in 1971, where he met Ollive (Humphrey). The two were married in 1979 and had a great marriage until her death in 2007. Jim worked at Corning Glass for 10 years, Mix Mill and Blunt for 10 years. Upon semi-retirement, Jim worked at the Save-on-Liquor South in Bluffton for 10 years until his retirement in 2005. Jim loved fighting for our country and freedom. He loved to fish, camp and was an avid bowler. He loved his family, especially his children. Jim enjoyed country music and dancing. His family was made up of musicians. Jim is survived by his two children Sheryl Delmas and Robert Simmons, one step-son, Louis Humphrey; seven grandchildren Heather Humphrey, Jamee Humphrey, Jose Delmas, Oriana Delmas, Ross Simmons, Destiny Green, and Kristopher Simmons, along with three great-grandchildren Conner, Brooklyn and Dakota. Friends are encouraged to visit with the family from 4 to 6 PM on Thursday (June 7th) at the Thoma/Rich, Lemler Funeral Home. Funeral services will take place following calling at 6 P.M. on Thursday at the funeral home with Minister Harold Driver and Evangelist Tim Tyner officiating. Memorials may be made to the family through the funeral home. Friends may send online condolences to www.thomarich.com. Funeral arrangements have been entrusted to the care of the Thoma/Rich, Lemler Funeral Home in Bluffton.

The family of James E Simmons created this Life Tributes page to make it easy to share your memories.

Send flowers to the Simmons family.