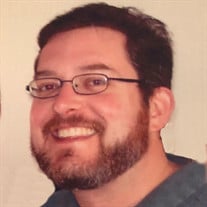 The world lost a brilliant mind with the passing of James R. Recker II of Indianapolis, formerly of Liberty Center, January 6th 2021 at Community North Hospital in Indianapolis. James was born in Lafayette Indiana to parents James R. Recker Sr. and Deanne E. Recker (Kurtz). James graduated from Park Tudor High School and went on to earn a BS from Ball State University with a major in political science and a JD from Indiana University (IU) School of Law. He spent part of his time at IU in the study abroad program in Dublin Ireland. While in Dublin James toured Europe and found and retained a particular fondness for the historic city of Amsterdam Holland. During his law career James practiced both criminal and civil law, successfully defending major felony cases and arguing before the Indiana Supreme Court. James was a voracious reader and prolific writer and had a deep knowledge on a wide range of subjects including; history, mythology, science, and especially politics. James was always keen on, and capable of engaging in a political discussion. James was skilled painter of miniatures which he paired with his life-long love of the role-playing adventure game Advanced Dungeons and Dragons (AD&D). James wrote extensively on the topic of AD&D, his magnum opus was a nearly 400 page treatise containing detailed campaign notes and house rules. James was proceeded in death by his beloved mother Deanne, and will be dearly missed by all who knew him. James is survived by his father James R. Recker Sr. (Indianapolis). Siblings; Daniel Recker (Indianapolis) and Elizabeth Recker (Albuquerque, NM). Sibling in-laws; Mike Rankin (Albuquerque), Amy Recker (Indianapolis). Nieces and nephews; Chase and Blake Recker (Indianapolis). Phineas Rankin, Zella Rankin, Holden Rankin, and Bronwyn Rankin (Albuquerque). And dear long-time friends; Lisa Dawson (Indianapolis), Lisa McHugh (Indianapolis), George Helmbock (Anthem, Arizona), Daniel Kelly (Covington, Kentucky), and Chad Anderson (Cincinnati, Ohio) Due to concerns over gatherings during the global pandemic a remembrance for close friends and family will be held at a later date. Funeral arrangements have been entrusted to the care of the Thoma/Rich, Lemler Funeral Home in Bluffton. Friends can send online condolences to the family at www.thomarich.com.

The family of James R. Recker II created this Life Tributes page to make it easy to share your memories.

The world lost a brilliant mind with the passing of James R....

Send flowers to the Recker family.