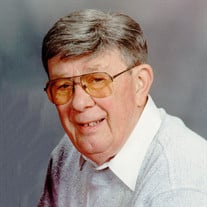 James R. Penrod, 86, of Bluffton passed away early Sunday morning, August 27, 2017, at Bluffton Regional Medical Center. Jim was born on May 11, 1931 in Wells County, Indiana to Samuel H. & Ada E. (Ebe) Penrod. He graduated from Liberty Center High School in 1949 and worked at Franklin Electric for 41 years, retiring in 1991. Jim attended Sonlight Wesleyan Church and was very active in the Bluffton Bowling Association, where he served as Secretary & Treasurer for over 50 years. On July 29, 1967 in Wells County, Jim and Velma Elizabeth (Manley) were married. Velma preceded Jim in death on May 20, 2017. Jim is survived by his children: Timothy Alan (Ruie) Penrod of Bluffton, IN and Diane Kay Carroll of Fort Wayne, step-children: John (Marilyn) Suman, Jr. of Shelbyville, Peggy Jean (John) Lee and Joyce (Max) Myers, both of Berne, IN, Darlene (Jerry) Garrett of Bluffton, IN, and 23 grandchildren, 29 great-grandchildren and 18 great-great-grandchildren. He is survived by a sister J. Irene Stanley of Bluffton. Jim was preceded in death by his parents and a daughter Cherri Penrod and grandson Michael Schladenhauffen along with a brother Richard W. Penrod. A service to celebrate Jim’s life will be held at 2:30 P.M. on Wednesday (August 30, 2017) at the Thoma/Rich, Lemler Funeral Home in Bluffton. Pastor Lyle Breeding will officiate. Burial will follow at Elm Grove Cemetery in Bluffton. Visitation will be held from 3 P.M. to 6 P.M. on Tuesday at the funeral home. Memorials may be made in Jim’s memory to Sonlight Wesleyan Church. Jim’s arrangements have been entrusted to the care of the Thoma/Rich, Lemler Funeral Home in Bluffton. Friends can send online condolences to the family at www.thomarich.com.

The family of James R. Penrod created this Life Tributes page to make it easy to share your memories.

Send flowers to the Penrod family.