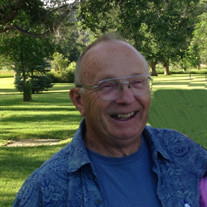 James J. Mortemore passed away at Lutheran Hospital in Fort Wayne on November 14, 2017. He was born August 3, 1943, in Toledo, Ohio. His parents were Edwin G and Nellie (Curson) Mortemore. He graduated from Bedford High School, Temperance, Michigan in 1961 and Fort Wayne Bible College (Taylor University) in 1966. He married Kay L. Falb on June 24, 1967, celebrating our 50th anniversary this past June on an Alaskan cruise. He was in pastoral ministry most recently at Six Mile Church moving to Bluffton in 1983. He began serving as custodian at Bluffton Columbian Elementary School in 1986 and retired from Bluffton High School in 2012 as athletic custodian. In his retirement he made wood craft items to sell at local farm markets and craft shows and enjoyed spending time with his grandsons and the family dog Tipsy. He learned his basic woodworking skills from his father who died when Jim was 15. He was a member of Murray Missionary Church serving as an usher, adult Sunday school teacher, member of the church board and in whatever capacity he was asked. God has blessed us with a son Roger James (Aimee), Fishers, Indiana and daughter Miriam Kay, Bluffton, two grandchildren, Adam Butler (17) and Caleb James (14) Mortemore. Also surviving are his sister Helen Sims, Fort Wayne, and brother, Ed C Mortemore (Barb), Grand Rapids, Ohio, 9 nephews and 9 nieces. Preceding him in death were his parents, nephew Don Mortemore, and brother-in-law Bill Sims. Funeral Services will be held at Murray Missionary Church on Saturday, (Nov. 18th) at 10 a.m. Pastor Mike Gilbert will officiate. Visitation will be held on Friday from 2 to 8 P.M. at Thoma/Rich Lemler Funeral home in Bluffton and for one hour prior to the service on Saturday at the church. Burial will follow at Six Mile Cemetery, Bluffton. Memorials are to Murray Missionary Church and One Mission Society, Greenwood, Indiana. Funeral arrangements have been entrusted to the care of the Thoma/Rich, Lemler Funeral Home in Bluffton. Friends can send online condolences to the family at www.thomairch.com.

James J. Mortemore passed away at Lutheran Hospital in Fort Wayne on November 14, 2017. He was born August 3, 1943, in Toledo, Ohio. His parents were Edwin G and Nellie (Curson) Mortemore. He graduated from Bedford High School, Temperance,... View Obituary & Service Information

The family of James J Mortemore created this Life Tributes page to make it easy to share your memories.

Send flowers to the Mortemore family.