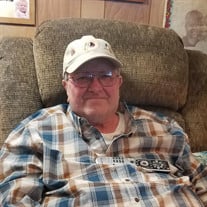 James Johnson, 87, of Bluffton passed away Wednesday morning, January 31, 2018, at Bluffton Regional Medical Center in Bluffton. He was born on January 8, 1931 in Leslie County, Kentucky to Henry & Eva (Howard) Johnson. Jim worked as a coal miner in Leslie County and retired from Sterling Casting in Bluffton in 1993, after working almost 25 years. He served his country in the United States Army during the Korean Conflict. On August 6, 1952, Jim married Patty Lou (Miller) at the Liberty Center United Methodist Church. They shared 53 years together before she preceded him in death on November 11, 2005. Jim was an avid NASCAR fan, enjoyed watching football, basketball, spending time outdoors, fishing, loved blue grass music and spending time with his grandchildren. Survivors include his 4 children; Jeff Johnson of Greenfield, Shirley Johnson of Tucson, AZ, Rhonda (Mike Richardson) Johnson of Bluffton and Kevin (Allie) Johnson of Uniondale. He was a loving grandpa to 19 grandchildren, 26 great-grandchildren and 5 great-great-grandchildren. He is also survived by a sister Betty Farley and a brother Billy Ray Johnson, both of Hyden, KY, and a daughter-in-law Mary Jo Johnson of Bluffton. He is preceded in death by his parents, wife Patty, a daughter Cathy Doublin, a son James P. “Jimmy” Johnson, a grandson Edward “Eddie” Doublin and a daughter-in-law Sharon Johnson along with three brothers; a twin, John Johnson, Leamon Johnson and Bobby Joe Johnson and two infant sisters; Edna Faye and Marcella Johnson. A Service to celebrate Jim’s life will be held at 5 P.M. on Saturday (February 3, 2018) at the Thoma/Rich, Lemler Funeral Home in Bluffton. Calling hours will be held from 12 Noon to 5 P.M. on Saturday prior to the service. A graveside service will take place at 3 P.M. on Monday (February 5, 2018) at Grassy Gap Cemetery located in the mountains of Leslie County, Kentucky. Memorials may be made to the family. Funeral arrangements have been entrusted to the care of the Thoma/Rich, Lemler Funeral Home in Bluffton. Friends can send online condolences to the family at www.thomarich.com.

The family of James Johnson created this Life Tributes page to make it easy to share your memories.