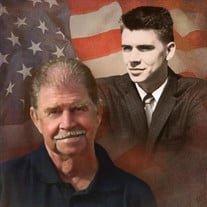 James “Jim” R. Taylor, 82 of Bluffton, passed away Wednesday evening, April 27, 2022, surrounded by his family. He was born on February 2, 1940, in Arjay, Kentucky to Clifton & Lucy (Durham) Taylor. A 1958, graduate of Bell County High School, Jim served our country in the United States Army. Jim worked as a self-employed contractor before joining Bear Creek Farms and Richard’s Restaurants where he worked for the last 40 years. He was a member of the American Legion Post #111 of Bluffton and the Bluffton Elks Lodge # 796. Jim enjoyed golfing, spending time outdoors and going on vacation with his family. He enjoyed listening to the waves come ashore at Myrtle Beach. On June 21, 1962 in Indianapolis, Jim and Beverly S. (McClain) were married, she preceded him in death on May 31, 2017. Survivors include four children: Terrie Taylor, Kevin (Julia) Taylor, Tracy (Kent) Beer and Chris (Shelly) Taylor, all of Bluffton. He was a loving “PaPa” to three grandchildren; David (Hailey) Beer, Austin Beer and Jeffrey Taylor and 2 step-grandchildren Matt & Derek Slentz. He is also survived by siblings; Fannie (Eavy) Hopkins of Lexington, KY, Priscilla Rogers-Taylor of Dallas, TX, Clif Taylor of Orlando, FL. and Hubert Taylor of Columbus, OH. A Service to Celebrate Jim’s life will be held at 11 A.M. on Tuesday, May 3, 2022, at the Thoma/Rich, Lemler Funeral Home in Bluffton. Burial will follow at Six Mile Cemetery with military honors by the U.S. Army Honor Guard and American Legion Post #111 Honor Guard. Memorials may be to Bluffton Elk’s Lodge – Parade of Nickels or Friends Who Care Cancer Relief Foundation. Calling hours will be held from 2 to 7 P.M. on Monday at the funeral home and for one hour prior to the service on Tuesday. An Elk’s Memorial service will take place at the conclusion of calling hours at 7 P.M. on Monday at the funeral home. Jim’s arrangements have been entrusted to the care of the Thoma/Rich, Lemler Funeral Home in Bluffton. Friends can send online condolences to the family at www.thomarich.com.

The family of James "Jim" R. Taylor created this Life Tributes page to make it easy to share your memories.

Send flowers to the Taylor family.