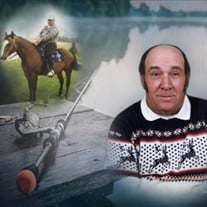 James “Jim” E. Masterson, 86 of Bluffton, passed away on Sunday afternoon, at his residence, surrounded by his family. Jim was born on September 1, 1935 in Bluffton to Jason Jay & Elizabeth Irene (Emerick) Masterson. He worked at Sterling Casting Co. in Bluffton and retired from the City of Bluffton, electric department, working on the tree crew for 32 years. Jim enjoyed working on setting up the Bluffton Street Fair for the many years. He loved to go fishing, to mow and enjoyed driving his red Chevy Truck. Many people remember Jim as he drove the streets of Bluffton with a fishing pole in the back of his truck. Spending time with his family was very important to Jim. On May 17, 1960 in Bluffton, Jim and Stella Ruth (West) were married. They enjoyed 56 years together before she preceded him in death on November 28, 2016. Survivors include two sons; Terry (Linda) Masterson of Poneto and Doug (Marie) Masterson of Bluffton along with 2 grandchildren; D.J. Masterson and Terra (Chad) Morris, both of Bluffton and 6 great-grandchildren and a sister, Patricia Adams of Bluffton. He is preceded in death by his parents, wife Stella, an infant daughter and siblings; Gene Masterson, William “Bill” Masterson, Martha Irvin, and Thomas “Tom” Masterson. Funeral services will be held at 10:30 A.M. on Friday (Sept. 24, 2021) at the Thoma/Rich, Lemler Funeral Home in Bluffton. Burial will follow at Fairview Cemetery in Bluffton. Visitation hours will be 2 PM to 8 PM on Thursday at the funeral home and for one hour prior to the service. Memorials may be made in Jim’s memory to Friends of the Wells County Animal Shelter. Funeral arrangements have been entrusted to the care of the Thoma/Rich, Lemler Funeral Home in Bluffton. Friends can send online condolences to the Masterson family at www.thomarich.com.

James &#8220;Jim&#8221; E. Masterson, 86 of Bluffton, passed away on Sunday afternoon, at his residence, surrounded by his family. Jim was born on September 1, 1935 in Bluffton to Jason Jay & Elizabeth Irene (Emerick) Masterson. He worked... View Obituary & Service Information

The family of James "Jim" E. Masterson created this Life Tributes page to make it easy to share your memories.