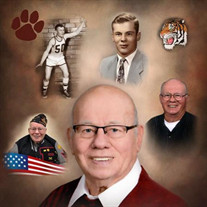 James W. Cobb, 86 of Bluffton, passed away Friday, November 6, 2020 at his residence. He was born on September 20, 1934 in Bluffton to Hamblin B. & Luceil (Betz) Cobb. Jim graduated from Bluffton High School in 1953, where he was awarded a Circle “B” honor by lettering 10 times in athletics. He was inducted into the Bluffton High School Athletic Hall of Fame. Jim served our country in the United States Army from 1953-1955. He was the Canteen Manager for the American Legion Post #111 from 1960-1993. Jim retired from the City of Bluffton – Parks Department. Jim was a member of the Calvary Lutheran Church. On April 15, 1954 in Wells County, Jim married his high school sweetheart and love of his life, Arzetta “Mae” Lehman. They celebrated 66 years together. Survivors include his wife, Mae of Bluffton and three children; Steve (Cindy) Cobb of Fort Wayne, Mark Cobb of Anderson and Tammy Schisler of Bluffton, along with five grandchildren; Chris (Stephanie) Cobb, Kevin Cobb, Ryan (April) Schisler, Nick (Shelby) Cobb and Danielle (Jeremy) Reed, along with 11 great grandchildren, Tyler Reed, Hannah Stambaugh, Ian Cobb, Kierstynn Reed, Paxton Cobb, Bryce Schisler, Parker Cobb, Carter Schisler, Isla Cobb, Finley Cobb, and Lindsey Schisler. Jim is survived by a sister Jacklyn Riechard. Jim is preceded in death by his parents and a sister Betty (Robert) Meyers two brothers; Tom Cobb and Jerry Cobb. Visitation will be held from 4 P.M. to 8 P.M. on Tuesday, November 10, 2020 at the Thoma/Rich, Lemler Funeral Home in Bluffton. A celebration of Jim’s life will take place at 10:30 A.M. on Wednesday, November 11, 2020 at the Thoma/Rich, Lemler Funeral Home in Bluffton with Tony Garton officiating. Burial will follow at Elm Grove Cemetery in Bluffton with Military Rites provided by the U.S. Army and American Legion Post 111. Memorials may be made to Bluffton Girls Softball Athletic Funds, payable to Bluffton High School or the Shriners Children’s Hospital. The safety of the family and all visitors is our utmost priority. For everyone’s safety, we ask that you practice social distancing. Masks are required for visitation and for Jim’s service. We appreciate your cooperation and patience. Funeral arrangements have been entrusted to the care of the Thoma/Rich, Lemler Funeral Home in Bluffton. Friends can send online condolences to the Cobb family at www.thomarich.com.

James W. Cobb, 86 of Bluffton, passed away Friday, November 6, 2020 at his residence. He was born on September 20, 1934 in Bluffton to Hamblin B. & Luceil (Betz) Cobb. Jim graduated from Bluffton High School in 1953, where he was awarded a... View Obituary & Service Information

The family of James W. Cobb created this Life Tributes page to make it easy to share your memories.

Send flowers to the Cobb family.