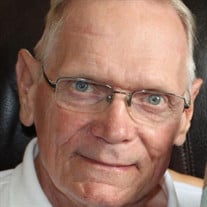 Not sure what to send?

James C. Carlson (Papa) Bluffton, Indiana had time to say his goodbyes to his family and friends. Secure in the knowledge that his work on earth was done and surrounded by his family, he passed away from a prolonged illness, including kidney disease at his home in his favorite chair on Sunday, March 13, 2022, at the age of 79. Jim is survived by his loving children, Raine Carlson Spott of Schererville, IN; Diana (Jim) Yonker of Bluffton, IN, Christine (Dr. Michael) Rotheker of Elkhart, IN; and Daughter-in-law Darcy Carlson of Knox; His brother Paul (Claudia) Carlson of Cedar Lake, IN. and sisters, Sue (Ed) Pavelka of Hobart, IN and Nance (Rob Gale) Carlson of Punta Gorda, FL. His cherished grandchildren: Maritza and Lauren Spott; Jenna, Brynn, and Matthew Yonker; Aidan, Sarah, and Emily Rotheker; and Zachery, Alex, AJ, and Savannah Carlson and many beloved nieces and nephews. He is preceded in death by his loving wife Andrea (Lockridge) “Nana;” his much-loved son, James Keith Carlson; his parents Clarence and Helen (Szumilas) Carlson; his sister and brother-in-law Katherine (Kitty) and John Batliner. Jim was born on December 13, 1942, in Hammond, Indiana. He graduated from Hammond Tech in 1961 and proudly joined The United States Airforce serving as Sergeant. He married Andrea, his high school sweetheart, settled in Merrillville, Indiana, and they spent 56 years together. He worked thirty-two years for Indiana Bell Telephone Company and retired to Bluffton, Indiana in 1998. He was a member of the American Legion, Bluffton Elks, and a past member of The Hammond Mohawks. Jim was an avid golfer and achieved his lifetime goal by getting a hole in one! He loved time with his family, a good joke, and breakfast at The Corner Depot, especially French toast Fridays! The family would like to give special thanks to friends and neighbors for their kind care and support. A graveside service will take place at 11:30 AM Central Time on June 11, 2022 at Crown Hill Cemetery in Knox, Indiana. The service will be followed by a luncheon at the Knox Community Center, located at 55 E. Lake Street, Knox, Indiana 46534. Memorials may be made in Jim’s memory to the American Legion Post #111 Honor Guard and can be sent to the funeral home. Arrangements have been entrusted to the care of the Thoma/Rich, Lemler Funeral Home in Bluffton. Friends can send online condolences to the family at www.thomarich.com.

James C. Carlson (Papa) Bluffton, Indiana had time to say his goodbyes to his family and friends. Secure in the knowledge that his work on earth was done and surrounded by his family, he passed away from a prolonged illness, including kidney... View Obituary & Service Information

The family of James C. Carlson "Papa" created this Life Tributes page to make it easy to share your memories.