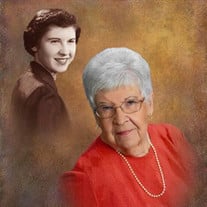 Jacquelyn Williams, 85, of Bluffton passed away on Monday morning, August 5, 2019, at Signature Health Care of Bluffton. Jacquelyn was born on January 19, 1934 in Wells County to Hugh L. & Honor (Kleinknecht) Harris. She graduated from Lancaster High School with the class of 1952. A long- time employee of Franklin Electric, Jacquelyn retired in 1996 after working 29 years. She loved to garden and was an avid reader and had an infectious laugh. She married William “Bill” W. Williams in 1977 in Ossian. He preceded her in death in September 2010. Survivors included three daughters; DeLeine Winchester of Greenwood, IN, Terri (Karen Chamuel) Bricker of Miami, FL, and Sandy (Hugo Smitter) Williams of Sarasota, FL. along with Ted (Sharon) Williams of Sun City, FL and John (Judy) Williams of Huntington. She is also survived by 3 granddaughters: Jennifer Spencer of Montpelier, Erin Portillo of Indianapolis and Sarah (Marcus) Garrett of Greenwood and 7 great-grandchildren; Reece, Conner, Sheldon, Alexander, Dolce-Marie, Isabella and Dominic. Jacquie is also survived by a brother H. Richard Harris of Jacksonville, and a sister Lorraine Hilsmier of Bluffton. Jacquie is preceded in death by her parents, her husband, a sister, Patricia Geller and Ben Williams. Calling hours will be held from 2 to 4 and 6 to 8 on Thursday (August 8, 2019) at the Thoma/Rich, Lemler Funeral Home in Bluffton. A service to celebrate Jacquie’s life will take place at 10:30 A.M. on Friday (August 9, 2019) at the funeral home. Pastor Mike Gilbert will officiate. Burial will follow at Oak Lawn Cemetery in Ossian. Memorials may be made to Riley Children’s Hospital. Funeral arrangements have been entrusted to the Thoma/Rich, Lemler Funeral Home in Bluffton. Friends can send online condolences to the family at www.thomarich.com.

The family of Jacquelyn K. Williams created this Life Tributes page to make it easy to share your memories.

Jacquelyn Williams, 85, of Bluffton passed away on Monday morning,...

Send flowers to the Williams family.