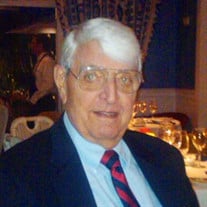 Jack Wilson (Popo) Thompson, 80, of Birmingham, MI passed away on February 1, 2016 in Naples, FL. Jack is survived by his patient and adored wife of 60 years, Rosalyn. He is also survived by his sister Judy (Vic) Edwards, his children Kimberly (Bill) Sedam, Angela (Mike) Jarnagin, and Melanie (Steve) Philipp. He will also be greatly missed by his five grandchildren: Kathryn and Kelly Lund, M. Ryan Jarnagin, Rachel (Eric) Hoisington (and future great grandchild), Jack Philipp, and two nephews. He is predeceased by his parents Bernice and Ralph Thompson. Jack, or Popo as his family has called him since the early 1980’s, was born in Crawfordsville, Indiana on February 18, 1935. Growing up, he loved his summers on Lake Wawasee with his grandfather, J.W. Mull. He graduated from Culver Military Academy in 1953 and always said that he cried the day he got there and the day he left. Jack went on to earn degrees in Economics and Mechanical Engineering from Purdue University in 1957. Jack had a successful professional career where he traveled the globe. He retired at the age of 42, from the position of Vice President of European Joint Ventures at N.A. Woodworth Company. He then became an accomplished entrepreneur. Jack loved spending time and being involved with his family. Jack enjoyed spending his summers in Northern Michigan where he had a home on Lake Michigan and his boat “Ramblin’ Rose.” He also loved classical music, reading, and the outdoors. He was an accomplished fisherman, hunter, and skeet shooter. He was the go-to person in his family for questions or advice on anything imaginable. His thirst for knowledge and impressive comprehension was with him until the end. Jack was active on various boards including serving as President for over twenty years of St. Thomas, Pelican Bay, Naples. He also enjoyed volunteering for organizations such as the Collier County Humane Society and Collier Harvest. A family memorial will be held. Burial will follow at Fairview Cemetery in Bluffton, Indiana. Thoma/Rich, Lemler Funeral Home of Bluffton, Indiana will be handling the arrangements. In lieu of flowers, memorial donations may be made in honor of his daughter Angela to Jack Thompson Memorial Fund, National Multiple Sclerosis Society-Michigan Chapter, 21311 Civic Center Drive, Southfield, MI 48076 or (http://main.nationalmssociety.org/goto/JWT). He will remain in our hearts forever.

Jack Wilson (Popo) Thompson, 80, of Birmingham, MI passed away on February 1, 2016 in Naples, FL. Jack is survived by his patient and adored wife of 60 years, Rosalyn. He is also survived by his sister Judy (Vic) Edwards, his children Kimberly... View Obituary & Service Information

The family of Mr. Jack W. Thompson created this Life Tributes page to make it easy to share your memories.