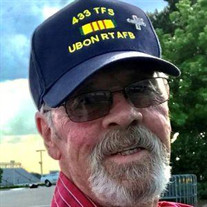 Jack E.C. Barkdull, who proudly and selflessly served his country in the United States Air Force for more than 31 years, passed away peacefully from cancer at his home in Martinsville Thursday evening, Jan. 23, 2020, surrounded by his family. He was 74. Jack was born on May 25, 1945 to P.P. Whitey Barkdull and Hazel Purvis Barkdull Jones in Marion, Ind. Jack graduated from Jefferson High School in Upland, Ind., in 1963. A few years later he was drafted into the Air Force. He served in the Vietnam War, where he was stationed in 1967-68 at the Ubon Royal Thai Air Force Based, near Ubon Ratchathani, Thailand and worked as an aircraft mechanic. The base was a front-line facility for the Air Force during the war. After working at Corning Glass for 10 years, he joined the Indiana Air National Guard 122nd Tactical Fighting Wing in maintenance control at Fort Wayne, Ind. He was part of Operation Desert Storm in Kuwait in 1991 helping patrol the no fly zone, Operation Iraqi Freedom in Iraq, and several other tours in Europe and the Middle East. Jack married the love of his life, Georgia Vaughn-Barkdull, whom he shared 39 years with. The couple enjoyed sharing time together in their dream home and their gardens with their four dogs and cat. Survivors include his wife Georgia, sons Robin (Denise) of Greenwood, Ind., and Chris (Aimee) of Boise, Idaho, their mother Pam (Jim) Thomason of Boise, Idaho; five brothers, Bill Barkdull Of Bluffton, Ind., Pete Barkdull of Hartford City, Ind., Mike Barkdull of Tampa, Fla., Joe Barkdull of Muncie, Ind., and Jeff Barkdull of Hartford City; three sisters, Vickie Towne, of Tampa, Pennie Weatherly of Muncie, and Jennie Gothrup of Westfield, Ind.; six grandchildren, and several nieces and nephews. He was preceded in death by his parents and one brother, Allen Barkdull. Funeral services for Jack will be held on Tuesday, Jan. 28 at 2 p.m. at Thoma/Rich, Lemler Funeral Home, 308 W. Washington St. in Bluffton. The family will receive guests at the funeral home starting at noon. Burial and full military honors will immediately follow the service at Fairview Cemetery in Bluffton.

Jack E.C. Barkdull, who proudly and selflessly served his country in the United States Air Force for more than 31 years, passed away peacefully from cancer at his home in Martinsville Thursday evening, Jan. 23, 2020, surrounded by his family.... View Obituary & Service Information

The family of Jack E.C. Barkdull created this Life Tributes page to make it easy to share your memories.

Jack E.C. Barkdull, who proudly and selflessly served his country...

Send flowers to the Barkdull family.