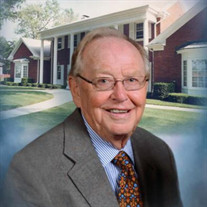 Howard D. Rich, 89 of Bluffton, passed away on Sunday morning, June 6, 2021, at Lutheran Hospital in Fort Wayne. Born Dec. 27, 1931 in Adams County, Indiana to Edward and Lillie (Beer) Rich, he was part of the first class to graduate from Adams Central High School in 1950. He married Beverly J. Lobsiger in June 1955 at the Monroe United Methodist Church. He served in the United States Army in the Military Police, and then graduated from Indiana College of Mortuary Science in Indianapolis. Howard came to Bluffton in 1956 to work for Bill Thoma in his funeral business and became a partner within five years, forming the Thoma/Rich Funeral Home. He was encouraged by his new employer to join the Bluffton Rotary Club, which he would serve in several offices including president and remain active for 55 years, rarely missing a meeting. He once credited the club’s motto, “Service Above Self,” for leading him into community service. The first effort was a joint project with his wife. During their first year as members of the Downtown Merchants Association, the couple responded immediately when it was announced that due to lack of funds, the city would not be putting up Christmas decorations. The couple volunteered to coordinate the project, donating their time and materials. He was soon asked to serve on the Community Chest board, the forerunner of the United Way and was the fund drive chair. Howard served on the boards of the Wells County Public Library and the Chamber of Commerce including terms as president of each. He co-chaired (with Beverly) the local bicentennial celebration in 1976 and he was a key leader in the revitalization efforts triggered by the loss of the Corning Glass plant in the late-1980s. This resulted in the creation of the Rivergreenway, the downtown landscaping and the Kehoe Riverfront Park. When the chamber of commerce and the Creative Arts Council were both in need of new office and program space in 2001, Howard conceived the idea of the Arts, Commerce and Visitors Centre on the banks of the Wabash and led the effort to raise more than $2 million to make the vision a reality in 2004. He retired from the funeral home in 2001, but remained active in a number of community and Rotary projects, including a total refurbishing of Rotary Park along the Rivergreenway. This resulted in the new pavilion being named in his honor. Howard Rich was named the Volunteer of the Year in 2014, he received the Wells County Community Service Award in 1977 and the Outstanding Citizen of the Year from the chamber in 1991. Howard and Bev were presented with the Art Leadership Award from the Arts Alliance of Indiana in 2002, and were the Grand Marshals for the Bluffton Street Fair opening parade in 2007. Howard was a longtime member of the First United Methodist Church in Bluffton, where he faithfully served on many committees. In addition to his wife, he is survived by two sons, D. Douglas Rich of Centennial, Colorado and Tom (Laurie) Rich of Pittsboro, Indiana. He was preceded in death by his parents and siblings: Dorothy Rich, Eileen Borne, Doyle Rich, Harold Rich, and Clisty Fruchte. Funeral Services will take place at 10:30 a.m. Friday, June 11, 2021, at the First United Methodist Church with Pastor Sherrie Drake and Rev. Larry Ray officiating. Burial will follow at Elm Grove Cemetery in Bluffton with military honors by the United States Army Honor Guard and the American Legion Post 111 Honor Guard. Calling hours will take place from 4 to 8 p.m. on Thursday, June 10, at the Thoma/Rich, Lemler Funeral Home in Bluffton. Memorials may be made to the First United Methodist Church or Wells Community Boys and Girls Club. Funeral arrangements have been entrusted to the care of the Thoma/Rich, Lemler Funeral Home in Bluffton. Friends can send online condolences to the Rich family at www.thomarich.com.

Howard D. Rich, 89 of Bluffton, passed away on Sunday morning, June 6, 2021, at Lutheran Hospital in Fort Wayne. Born Dec. 27, 1931 in Adams County, Indiana to Edward and Lillie (Beer) Rich, he was part of the first class to graduate from Adams... View Obituary & Service Information

The family of Howard D. Rich created this Life Tributes page to make it easy to share your memories.

Howard D. Rich, 89 of Bluffton, passed away on Sunday morning,...

Send flowers to the Rich family.