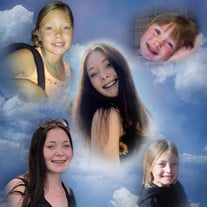 Honesty Marie Tappy, 17 of Poneto, passed away on Sunday evening, April 10, 2022. She was born on January 1, 2005, in Bluffton to Jeremy Tappy and Jonia King. Honesty was a high honor student and a junior at Bluffton High School. She enlisted in the United States Marine Corps, where she scored high enough to qualify her into intelligence. She planned to go to basic training this spring. Honesty worked at McDonald’s, Arby’s and just started working at KFC in Bluffton. To those who knew her, she could be described as sassy, but with a heart of gold. She loved spending time with her family, especially Callye and Charisma, and enjoyed playing softball. Survivors include her father, Jeremy Tappy of Poneto, mother, Jonia King of Bluffton, step-father, Zac Bowlin of Bluffton, along with two sisters, Destiny K. Tappy of Poneto, Ebony Bowlin of Bluffton, and a little brother, Messiah Bowlin of Bluffton, her grandparents; Scott Tappy of Poneto, Lisa & Robert Hinkledire of Bluffton, Billie King of Markle, Fred Zook of Bluffton and Claudette “Pumkin” Bowlin of Bluffton, and great-grandparents; Sandra King of Bluffton, Judy Call of Alabama, Mark and Betty Zook of Bluffton. Honesty is also survived by her aunts, Cassie (Steven) Detamore, Nikki King, her uncles, Anthony (Jessica) Tappy, Terry and Tony King, Terry (Abby) Tappy Along with special cousins, Justice, Ambrosia, Brianna, Savannah, Carrisa, Emma, Maleea, Jayden, Neveah, Cadence, Nolan, April & Amanda, Candyce, Cole, Charisma, Callye, Riley and Jordan. Along with her best friend, her German shepherd, Luna. She is preceded in death by her great-grandfather, Richard King, cousin Joshua Ortiz, and great-uncle Jim King. A service to celebrate Honesty’s life will at 1 P.M. on Saturday, April 16, 2022, at the Thoma/Rich, Lemler Funeral Home in Bluffton. Visitation hours will take place from 2 to 7 P.M. on Friday at the funeral home and for one hour prior to the service on Saturday. Memorials may be made to the Honesty Tappy Memorial Fund, payable to First Source Bank, and can be sent to the funeral home. Funeral arrangements have been entrusted to the care of the Thoma/Rich, Lemler Funeral Home in Bluffton. Friends can send online condolences and memories to www.thomarich.com.

Honesty Marie Tappy, 17 of Poneto, passed away on Sunday evening, April 10, 2022. She was born on January 1, 2005, in Bluffton to Jeremy Tappy and Jonia King. Honesty was a high honor student and a junior at Bluffton High School. She enlisted... View Obituary & Service Information

The family of Honesty Marie Tappy created this Life Tributes page to make it easy to share your memories.

Honesty Marie Tappy, 17 of Poneto, passed away on Sunday evening,...

Send flowers to the Tappy family.