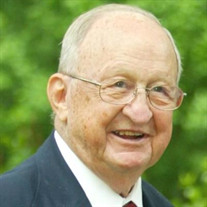 Homer Eugene Petzel, 92, of Danielsville, Georgia and a former Bluffton Resident passed away on April 7, 2017 after a short illness. Mr. Petzel was born on September 16, 1924 in Bluffton to Floyd H. & Lucille (Richey) Petzel. He graduated from Bluffton High School with the class of 1943. Like many young men of his generation he joined the service of his country in World War II immediately after school and served in the Navy from 1943 to 1946. On October 6, 1946 he married his high school sweetheart, Betty Lou Neusbaum, (deceased). They were married 66 years. While in Bluffton Mr. Petzel was a partner in the Graden Service Station with Bob White before moving to Florida. He was a member of the Masonic Lodge, First United Methodist Church, Elks Lodge and a Lifetime member of the Bluffton American Legion. Survivors are a daughter Karyl A. Maiorana of Hartwell, GA and a son Todd E. Petzel of Danielsville, GA, along with 4 grandchildren: Wendy Tomlinson, Larry Geist, Sarah and Rebecca Petzel. He also had 3 great-grandchildren, Mark and Brett Tomlinson and Lynsey MacKenzie. He is also survived by three brothers: Robert F. Petzel, Jerry W. Petzel and Ned R. Petzel and a sister Nancy K. Payne. Homer is preceded in death by his wife, and parents. Over the years his greatest joys were bowling, fishing, traveling with his wife, and enjoying his family. His first attempt at retirement was short-lived. After scratching off every item on the house to-do list in a matter of months, he returned to the labor force, working part-time into his early 80’s. Social interactions were a vital part of his life, and family, friends and colleagues all valued the time he shared with them as precious. Calling hours will be held from 9 a.m. to 11 a.m. on Wednesday (April 12, 2017) at the Thoma/Rich, Lemler Funeral Home in Bluffton. A Masonic Memorial Service will be held at 11 a.m. Wednesday, followed by funeral services at the funeral home. Jeff Lemler will officiate. Burial will follow at Old Salem Cemetery with military honors by the United Sates Navy Honors and American Legion Post #111 of Bluffton. In lieu of flowers, contributions to any of the Bluffton chapters of the Masonic Lodge, the American Legion or the Elks in his memory would be appreciated. Funeral services have been entrusted to the care of the Thoma/Rich, Lemler Funeral Home in Bluffton. Friends can send online condolences to the family at www.thomarich.com.

Homer Eugene Petzel, 92, of Danielsville, Georgia and a former Bluffton Resident passed away on April 7, 2017 after a short illness. Mr. Petzel was born on September 16, 1924 in Bluffton to Floyd H. & Lucille (Richey) Petzel. He graduated... View Obituary & Service Information

The family of Homer E. Petzel created this Life Tributes page to make it easy to share your memories.

Homer Eugene Petzel, 92, of Danielsville, Georgia and a former...

Send flowers to the Petzel family.