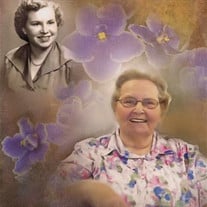 Hilda May Baumgartner, 84, of Vera Cruz, passed away on Monday morning, April 30, 2018, at Markle Health & Rehab Center. Hilda was born on April 6, 1934 in Bluffton to Clarence Kahn & Flossie (Ramseyer) (Robert) Kahn-Holmes. She graduated from Bluffton High School in 1952. She worked at Franklin Electric and at Russ & Norm’s Grocery Store in Vera Cruz and provided childcare for many children over the years. She was a member of St. John Family Worship Center in Vera Cruz. On March 6, 1953, Hilda and Harry H. Baumgartner, Sr. were married. They shared 60 years of marriage and he preceded her in death on November 28, 2013. Survivors include her children; Debra May Studebaker of Bluffton, Harry H. Jr. “Sonny” Baumgartner of Vera Cruz and Dennis J. (Petra) Baumgartner of Bluffton, along with 4 grandchildren; Sonja (Larry) Croy of Vera Cruz, Matthew Studebaker of Bluffton, Jonathan Huffman of Bluffton and Ashley May (Blaine) Mosser of Ossian; 6 great-grandchildren; Sierra Storm Croy of Vera Cruz, Nova May & Mac Robert Mosser, both of Ossian, Amber, Christian & Madeline Croy, all of Bluffton. She is also survived by siblings; Virgil Kahn of Bluffton and Rosie (Slug) King of Vera Cruz. She is preceded in death by her parents, her step-father Robert “Skeeter” Holmes, a son Rex Allen Baumgartner along with siblings; Clarence “Cat Fish” Kahn, Lester Kahn, Robert “Strawberry” Kahn, Mary Belle Baumgartner, Earl Kahn along with an infant brother and a daughter-in-law Rita K. (Hultz) Baumgartner. A service to celebrate Hilda’s life will be held at 10:30 A.M. on Friday (May 4th) at the Thoma/Rich, Lemler Funeral Home in Bluffton with Rev. Don Rentschler officiating. Burial will follow at Fairview Cemetery in Bluffton. Calling Hours will be held from 2 to 8 on Thursday at the Thoma/Rich, Lemler Funeral Home in Bluffton. Memorials may be given to St. John Family Worship Center or Riley Children’s Hospital. Funeral arrangements have been entrusted to the care of the Thoma/Rich, Lemler Funeral Home in Bluffton. Friends can send online condolences to the family at www.thomarich.com.

The family of Hilda May Baumgartner created this Life Tributes page to make it easy to share your memories.

Hilda May Baumgartner, 84, of Vera Cruz, passed away on Monday...

Send flowers to the Baumgartner family.