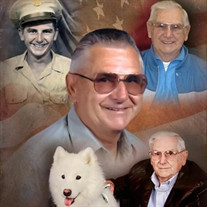 Herschell L. Penrod, 93 of Bluffton, passed away on Sunday, January 3, 2021 at Bluffton Regional Medical Center. Herschell was born on April 7, 1927 in Wells County, Indiana to John H. and Gladys (Wolfe) Penrod. He attended Bluffton High School and received his honorary diploma from Dr. Byanski in 2002. He served his country during World War II as a Staff Sargent for the U.S. Army. Following his discharge from the Army, he served in the Indiana National Guard for 6 years. Herschell was a Superintendent of Construction for H & M Builders for 14 years, worked for Culligan Soft Water in Linn Grove and worked district maintenance for Bluffton-Harrison MSD for 16 years before retiring in 1992. During his retirement, Herschell worked for Habegger’s Ace Lumber. He was a member of Epworth Methodist Church, American Legion Post #111 and the Masonic Lodge #145 F. & A.M. in Bluffton. Herschell’s favorite hobbies were fishing, woodworking, and he enjoyed cooking and baking. His specialty was his pineapple upside-down cake, and Herschell enjoyed making them and sharing them with his family and friends from the school. He would often drop off homemade items for the Bluffton Police Department. Herschell enjoyed traveling to the Wisconsin Dells to go fishing and attended many Komets hockey games with his family, especially on New Year’s Eve. Over the last years, Herschell enjoyed keeping in contact with this family and friends through Facebook. Herschell and Wannetta L. (Maupin) Penrod were married in Huntertown, IN on May 12, 1946. They celebrated 56 years of marriage until she preceded him in death on May 22, 2002. Survivors include his three sons; Geoffrey (Nicole) Penrod of Columbia City, Boyd (Donna) Penrod of Bluffton and Brian (Anita) Penrod of Markle, a son-in-law, Kenneth R. Flowers of Bluffton, along with 8 grandchildren,14 great-grandchildren and 3 great-great-grandchildren. Herschell is preceded in death by his parents, his wife, Wannetta, his daughter Jeannie Flowers and two sisters; Alverta Gutherie and Marlyn S. Penrod. Private family services will be held with Tony Garton officiating. Friends wishing to watch Herschell’s service can do so from the safety of their home, utilizing a Zoom Meeting. You can login using the Zoom Meeting I.D. # 854 7123 7550 and you can login after 10:45 A.M. on Thursday, January 7, 2021. Private family burial will follow at Elm Grove Cemetery in Bluffton. The family prefers memorials over flowers, and they can be made to the American Lung Association or Bluffton Park’s Department and should be mailed to the funeral home. Funeral arrangements have been entrusted to the care of the Thoma/Rich, Lemler Funeral Home in Bluffton. Friends wishing to send messages and memories of Herschell to his family can do so at www.thomarich.com.

The family of Herschell L. Penrod created this Life Tributes page to make it easy to share your memories.

Herschell L. Penrod, 93 of Bluffton, passed away on Sunday, January...

Send flowers to the Penrod family.