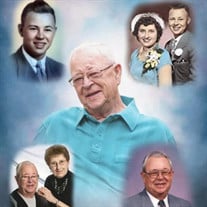 Herbert E. Grover, 92, a former resident of Liberty Center, passed away on Friday morning, April 9, 2021, at Heritage Pointe of Warren. He was born on October 16, 1928 in Jackson Township, Wells County to Paul L. & Agnes L. (Ruse) Grover. Herbert was a 1946 graduate of Rock Creek High School in Huntington, County and served in the Indiana National Guard. He was a member of Boehmer and Liberty Center United Methodist Churches, the Masonic Lodge in Warren until the lodge closed and then transferred his membership to F. & A.M. #145 of Bluffton. He enjoyed camping and playing Euchre. Herbert and Phyllis did enjoy spending their winters in Bradenton, FL. for many years. On May 20, 1950, in Poneto, Herbert and Phyllis J. (Nusbaumer) were married. They shared 68 years of marriage, before Phyllis preceded him in death in 2019. Herbert owned and operated a can milk route in Wells and Huntington County, along with farming and milking on the family farm. He also worked at DANA Corp. in Marion and owned and drove a dump truck for himself and for Mohr Construction in Markle. After Mohr construction was purchased by E. & B. Paving, Herbert drove a lowboy and moved asphalt paving equipment in Northern Indiana for 25 years and retired in 1990. Survivors include children; Daniel E. (Janean) Grover of Poneto, Marsha D. (Dennis) Powell of Big Chapman Lake, Warsaw and Tamara K. Reid of Huntington, along with 5 grandchildren; Robert and Terrance Grover, Kristi (Powell) Green, Kevin Powell, Angela (Mossburg) Musco and 7 great-grandchildren and a half-brother, Tim (Janice) Grover of Decatur. Funeral services will be held at 10:30 A.M. on Wednesday, April 14, 2021, at the Thoma/Rich, Lemler Funeral Home in Bluffton. Pastors Ted Stanton and Gerald Moreland will officiate. Burial will follow at Woodlawn Cemetery in Warren. Friends will be able to live stream the service using Zoom Meeting in the comfort of your home. The Zoom Meeting ID # is 846 7554 4345. You can login to the live stream after 10:15 A.M. on Wednesday. Calling Hours will be held from 2-3 P.M. on Tuesday, April 13, 2021, at Heritage Pointe, Applegate Chapel in Warren, Indiana and from 4-7 P.M. Tuesday at the funeral home in Bluffton, Indiana and also be one hour prior to the service on Wednesday. A Masonic Memorial Service will take place at 7 P.M. on Tuesday at the conclusion of calling by the Bluffton F. & A.M. Masonic Lodge # 145. Memorials may be made in Herbert’s memory to Liberty Center United Methodist Church. The safety of the family and all visitors is our utmost priority. For everyone’s safety, we ask that you practice social distancing. Masks are required for visitation and for the service. During the current guidelines, we are only allowed a limited number of people in the building at a time. We appreciate your cooperation and patience. Funeral arrangements have been entrusted to the care of the Thoma/Rich, Lemler Funeral Home in Bluffton. Friends can send online condolences to the family at www.thomarich.com.

The family of Herbert E. Grover created this Life Tributes page to make it easy to share your memories.

Send flowers to the Grover family.