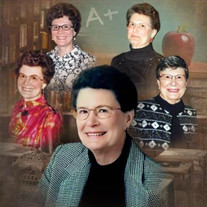 Helen Jean (Gorrell) Blessing, 88, of Markle passed away on Sunday, January 12, 2020 at River Terrace Estates in Bluffton. Jean was born in Fort Wayne, Indiana, to Granville and Martha Gorrell. Jean graduated with honors from South Side High School in 1949, where she was a member of the National Honor Society. She was the only student participant in the formal Commencement program, where she gave the Invocation. She receive an academic scholarship to college from General Electric, where her father was a tool and die maker. She married Beverly Gene Blessing of Markle, Indiana on March 25, 1951 at the First Methodist Church in Fort Wayne. Jean received a dual major Bachelor’s degree in 1953 (English and Home Economics) from Ball State University, a Masters degree in 1968 and had compiled an additional 56 master hours in Administration, English and Secondary Education. Jean worked as an English and Home Economics teacher in the Bluffton Harrison Metropolitan School District. She later became a counselor and the assistant principal at the Bluffton Harrison middle school. In 1965 Jean became a member of the First Presbyterian Church of Bluffton, where she was ordained a Deacon in 1966, an Elder in 1973 and served as a trustee from 1986-89 and Clerk of Session from 1995 to 2009. She served in various capacities in the Bluffton community including president of the Creative Arts Council, member of the Community Corrections Advisory Board and the Wells County Public Library Board, leader for the Child Protection Team, president of Family Centered Services, Vice President of Psi Iota Xi sorority and a founding member of the Wells Community Boys and Girls Club. In 1986 Jean was honored with the “Women of the Year” award by the Bluffton chapter of Business and Professional Women, recognized “in appreciation for her exceptional qualities of leadership and integrity and her distinguished achievements for the betterment of her community.” Jean influenced multiple generations of school students in her capacity as teacher and assistant principal in the Bluffton Harrison school district and changed many of their lives for the better, showing them the path of education, determination and self-reliance. Jean was a voracious reader, loved to knit (including teaching classes), sew, cook and bake bread. She traveled the world with Bev after retirement, making multiple trips to Scotland, London, Amsterdam, Italy and throughout Europe. They attended classical concerts throughout the US and enjoyed summering at their home in the Upper Peninsula of Michigan. She is survived by her husband, Beverly G. Blessing, and son, Eric (Pam) Blessing of Markle, Indiana, as well as her daughter, Becky (Perry) White of Brimfield, Illinois and grandchildren Jeremiah White of Peoria, IL, Caroline Blessing and Sara Blessing, both of New York City. Jean was preceded in death by her parents and younger sister, Anna (Gorrell) Powless of Anderson, Indiana. Calling hours will be 2 to 8 pm on Friday January 17th at Thoma/Rich, Lemler Funeral Home in Bluffton. A Celebration of Life Service will be held at 10:30 am Saturday, January 18 th at the First Presbyterian Church of Bluffton on Dustman Road with Rev. Lyle Ewing officiating. Memorials can be made to Family Centered Services of Bluffton or the Wells Community Boys and Girls Club. Funeral arrangements have been entrusted to the care of the Thoma/Rich, Lemler Funeral Home in Bluffton. Friends can share online condolences with the family at www.thomarich.com. “RICH is not how much you have or where you are going or even what you are, RICH is who you have beside you.”

The family of Helen Jean Blessing created this Life Tributes page to make it easy to share your memories.

Helen Jean (Gorrell) Blessing, 88, of Markle passed away on Sunday,...

Send flowers to the Blessing family.