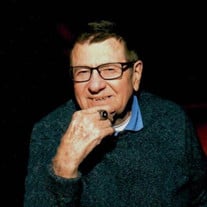 Not sure what to send?

Harold L. Morgan, 94 of Bluffton passed away on Thursday afternoon, January 13, 2022, at River Terrace Estates in Bluffton. He was born on July 11, 1927 in Huntington County, Indiana to Ivy & Maude (Rotramel) Morgan. A 1945 graduate of Liberty Center High School, Harold grew up working on the family farm with his father. Harold served our country in the United States Army. He worked at the State Park as an animal keeper and after retirement at Heyerly’s Market for many years. Harold retired from Franklin Electric in 1989, after 38 years of service. He was a member of American Legion Post #111 of Bluffton and served for many years on the Honor Guard. He was an avid bowler and golfer and enjoyed camping and fishing with his family. He married Phyllis (Peg) Scott on July 17, 1948 and raised his family in Bluffton, IN. On August 21, 1999 at the Epworth United Methodist Church, Harold & Kathleen “Kathy” (Walsh) Sliger were married. Survivors include his wife Kathy of Bluffton, daughters DeVona (Ward) Krause of Churubusco & Beth Hamm of Fishers, sons Dennis Morgan of Uniondale & Glen (Shar) Morgan of Ossian, stepsons; Scott Sliger of Blue Lake & Jim (Robin) Sliger of Bluffton, former daughter-in-laws Cathy Morgan & Deborah Morgan of Fort Wayne and Deborah Crump of Poneto, 7 grandchildren, 2 step grandchildren, 10 great-grandchildren and 6 step great-grandchildren. Harold is also survived by 2 sisters; Beth Johnloz of Craigville and Eleanor Ohlwine of Acrola. He is preceded in death by his former wife, Phyllis (Peg) Morgan, son Bruce Morgan, a step-son, Kevin Michael Sliger, two grandsons JD Morgan and Brent Sliger, grandson-in-law John Jarrell and siblings Jerry Morgan, Stanley Morgan, James “Richard” Morgan, John Morgan and an infant brother, Robert Morgan. Visitation will be held from 4 to 8 P.M. on Wednesday (January 26, 2022) at the Thoma/Rich, Lemler Funeral Home and for one hour prior to the service. Funeral services will be held at 1:00 P.M. on Thursday (January 27,2022) at the funeral home with Dr. Bryson E. “Gene” Bell officiating. Burial will follow at Elm Grove Cemetery in Bluffton with military honors by the United States Army Honor Guard and American Legion Post #111 Honor Guard. For the safety of the family, visitors are asked to wear a mask to visitation and the funeral service. Memorials may be given in Harold’s memory to the American Legion Post #111 Honor Guard. Funeral Arrangements have been entrusted to the Thoma/Rich, Lemler Funeral Home in Bluffton. Friends can send online condolences to Harold’s family at www.thomarich.com.

Harold L. Morgan, 94 of Bluffton passed away on Thursday afternoon, January 13, 2022, at River Terrace Estates in Bluffton. He was born on July 11, 1927 in Huntington County, Indiana to Ivy & Maude (Rotramel) Morgan. A 1945 graduate of Liberty... View Obituary & Service Information

The family of Harold L. Morgan created this Life Tributes page to make it easy to share your memories.

Harold L. Morgan, 94 of Bluffton passed away on Thursday afternoon,...