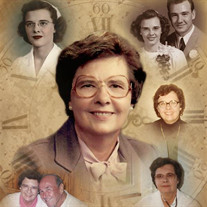 Hallie Marie Pace, 95 of Liberty Center, passed away on Wednesday morning, August 14, 2019, at Christian Care Retirement Community in Bluffton. She was born on January 4, 1924 in Wells County, Indiana to Alfred & Marie (Brickley) Girod. Hallie and James “Dwight” Pace were married on August 15, 1946 in her home in Rockcreek Township and Dwight preceded her in death on September 21, 2003. She graduated from Rockcreek Township High School and obtained her RN degree from Lutheran Hospital in Fort Wayne. She worked at Wells Community Hospital for many years. Hallie was a longtime member of the Liberty Center Baptist Church, where she had served as a Deaconess, Sunday School teacher and a member of the choir along with many other committees. She served on the board of directors for the Wells County Library, the PBS Club and Wells County Extension Homemakers Club. Survivors include three sons, Dr. James (Lucy) Pace of Pensacola, Fla.; Dr. Thomas (Connie) Pace of Prescott, Ariz., and Robert (Kim) Pace of Noblesville, IN. She is survived by four grandchildren; Gina Pace, Jesse (Christina) Pace, Stephanie (Matt) Murray and Brian Pace, and two step-grandchildren; Crystal King and Ryan King. Hallie is also survived by 7 great grandchildren; Kaylee, Ethan and Lily Murray, Lainey & Aubrey Pace, Neeley & Hallie Pace, and five step-great-grandchildren; Jayden King & Chase Moriarty, Corin, Jayla and J.J. Weathers. Hallie is also survived by siblings; Jean (Jack) Kober of Bluffton, Joyce Grandlienard of Bluffton and Don Girod of Indianapolis. She is preceded in death by a sister, Ina Mae Dormire. Services will be held at 11 A.M. on Saturday (August 17, 2019) at Liberty Center Baptist Church with Pastor Aaron Westfall officiating. Burial will follow at Mossburg Cemetery. Calling hours will be held from 4 to 8 P.M. on Friday at the Thoma/Rich, Lemler Funeral Home in Bluffton and for one hour prior to the service at the church. Memorials may be made to Liberty Center Baptist Church. Funeral arrangements have been entrusted to the care of the Thoma/Rich, Lemler Funeral Home in Bluffton. Friends can send online condolences to the family at www.thomarich.com.

The family of Hallie Marie Pace created this Life Tributes page to make it easy to share your memories.

Hallie Marie Pace, 95 of Liberty Center, passed away on Wednesday...

Send flowers to the Pace family.