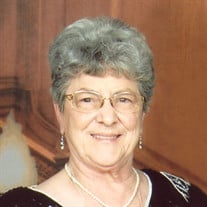 Gladys R. Cotton, 87 of Bluffton passed away at 3:48 p.m. Monday, January 04, 2016, at Heritage Pointe in Warren. A lifetime resident of Wells County, Gladys graduated from Rockcreek High School in 1946 and Wayne University of Cosmetology. She was a beautician and the owner /operator of Gladys’s Glamour Shop in Bluffton for many years. Gladys was born on June 13, 1928 in Wells County to John & Hazel (McCleery) McAfee. On July 27, 1947 she married Lyle J. Cotton. He preceded her in death on May 20, 2013. She was an active leader and member of the First United Methodist Church in Bluffton and in the United Methodist Women. She was an active member of the Order of the Eastern Star in Bluffton and Waynedale, Bayview Reading Club and Daughters of the American Revolution along with being a District Officer for B.P.W. Business and Professional Women. She also served as the president of the Fort Wayne Society of Beauticians for several years and was an active member of the Wells County Historical Society. Survivors include her daughter, Claudia Ann (Richard) Gipson of Dillsboro, IN, and a son, David McAfee (Kathleen) Cotton of Lynnwood, WA. Also surviving are eight grandchildren, Jason T. (Karie) Gipson, Alysa Shay Gipson, O. Bryce (Valerie) Gipson, Ian D. (Angel) Cotton, Dylan S. Cotton, Matthew S. Cotton, Joshua F. (Brandie) Cotton and Daniel C. Cotton. Other survivors are ten great-grandchildren and a brother Jackie (Marlene) L. McAfee of Lake George, MI. She was preceded in death by a son, Steven F. Cotton, and a daughter-in-law, Judy A. Cotton and siblings: John McAfee, Don McAfee, Bob McAfee, Elizabeth McAfee, Fred McAfee, Harry McAfee and Maxine Moser. Calling hours will take place from 4 to 8 on Friday (Jan. 8th) at Thoma/Rich, Lemler Funeral Home in Bluffton. A funeral service to celebrate Gladys’s life will be at 10:00 a.m. Saturday, January 9, 2016, at the First United Methodist Church with Rev. Steve Bard and Pastor Henry Favorite officiating. Burial will follow at Prospect Cemetery in Uniondale. Preferred memorials are to First United Methodist Church or the Epworth Forest Improvement Fund. Funeral arrangements have been entrusted to the care of the Thoma/Rich, Lemler Funeral Home in Bluffton. Friends can send online condolences to the family at www.thomarich.com

The family of Gladys R Cotton created this Life Tributes page to make it easy to share your memories.

Send flowers to the Cotton family.