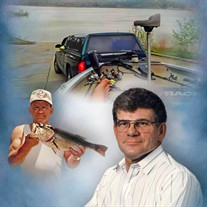 Gerald “Slug” W. King, 79 of Vera Cruz, passed away early Sunday morning, May 30, 2021, at Lutheran Hospital in Fort Wayne. He was born on March 28, 1942 in Bluffton to Gerald E. & Anna Louise (Bennett) King. Slug attended Bluffton High School and worked as a machine operator for Hulcher’s Emergency Services in Bluffton for many years. He retired as a dispatcher and driver for Waste Management Company. He enjoyed spending time with his family, fishing and loved to fish for bass. On August 31, 1991 in Vera Cruz, Slug and Rosie A. (Kahn) King were married. Survivors include his wife, Rosie of Vera Cruz along with children; LaDonna L. King of Fort Wayne, Renea (Mark) Baker of Decatur, Annie (Michael) Rochowiak of Toledo, OH., Shane (Stephanie) King, Jason (Jessica) King, Tammy (Jerry) Schlagenhauf and Georgie (Chris) Corle, all of Bluffton, along with 26 grandchildren, 13 great-grandchildren and one on the way. Slug is also survived by his siblings; Dian (Jim) Grover of Bluffton, Linda Crews of Amity, AK., Kenny (Emmy) King of Liberty Center, two sisters-in-law; Sandy King of Bluffton and Robin King of Uniondale, along with a special brother-in-law, Virgil Kahn and a special aunt, LuLu Peeper. He is preceded in death by his parents, a son, Scott D. Collier, and siblings; James W. King, Fred King, Beck King, Dick King and Bob King. Visitation will be held from 4 to 8 P.M. on Wednesday at the Thoma/Rich, Lemler Funeral Home and for one hour prior to the service on Thursday. Funeral Services will be held at 10:30 on Thursday (June 3, 2021) at the Thoma/Rich, Lemler Funeral Home in Bluffton with Pastor H.F. Cox officiating. Burial will follow at Fairview Cemetery in Bluffton. Memorials may be made to The Garage on Main Street. Funeral arrangements have been entrusted to the care of the Thoma/Rich, Lemler Funeral Home in Bluffton. Friends can send online condolences to the family at www.thomarich.com.

The family of Gerald "Slug" W. King created this Life Tributes page to make it easy to share your memories.

Send flowers to the King family.