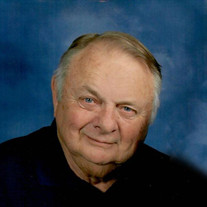 Gerald L. Johnson, 76, of Bluffton passed away on Tuesday evening, January 9, 2018, at Adams County Memorial Hospital in Decatur. He was born on March 11, 1941 in Wells County to Elmer “Jack” & Wilma (Brown) Johnson. Gerald graduated from East Union High School in 1959 and attended Purdue University. He retired from Ormsby Trucking as a driver in 2005. He was a member of Hope Missionary Church where he was active in missions. Gerald loved to spend time with his family and attend the grandchildren’s sporting events. On September 9, 1961 in Wells County, Indiana Gerald & Nancy (Wilson) Johnson were married. Survivors include his wife Nancy of Bluffton along with three sons: P. Scott (Kelly) Johnson, Rick (Lori) Johnson and Darin (Amy) Johnson, all of Bluffton and four daughters: Lanie (Brian) Hinshaw of Bluffton, Lori (Dean) Lloyd of rural Ossian, Dena (Jeff) Schmelzer of Bremen, Ohio and Deidre (Ronny) Stoppenhagen of rural Ossian. Gerald was a proud grandpa to 25 grandchildren, 8 great-granddaughters and a great grandson along with 2 brothers: David (Sharon) Johnson and Philip (Rosie) Johnson of Bluffton. A service to celebrate Gerald’s life will be held at 3:00 P.M. on Sunday (January 14, 2018) at Hope Missionary Church in Bluffton. Pastor Gary Aupperle will officiate. Calling hours will be held from 1 to 8 P.M. on Saturday at the Thoma/Rich, Lemler Funeral Home in Bluffton and for one hour prior to the service on Sunday at the church. Burial will take place at a later date at Prospect Cemetery in Uniondale. Memorials can be made to Hope Missionary Church Mission Fund. Funeral arrangements have been entrusted to the care of the Thoma/Rich, Lemler Funeral Home in Bluffton. Friends can send online condolences to the family at www.thomarich.com.

The family of Gerald Johnson created this Life Tributes page to make it easy to share your memories.

Gerald L. Johnson, 76, of Bluffton passed away on Tuesday evening,...