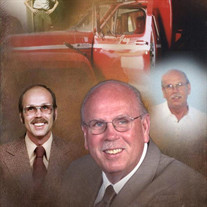 Gerald “Jay” Stauffer, 81 of Markle, passed away on Sunday evening, July 26, 2020 at Lutheran Hospital in Fort Wayne. Jay was born on August 5, 1938 in Adams County, Indiana to John & Pearl (Smitley) Stauffer. A 1957 graduate of Rockcreek High School, Jay delivered fuel for National Oil & Gas for over 30 years. He previously was the owner & operator of the Markle Shell Station, along with working in construction. Jay and Ruth Ann (Faust) were married on March 6, 1960 at the Markle United Methodist Church, where he was a longtime member. They shared 59 years of marriage and Ruth Ann preceded Jay in death on January 7, 2020. Survivors include his children; Tammera (Richard) Hazelwood of Cumming, GA., Richard J. (Julie) Stauffer of Plymouth, John Edward “Eddie” (Amy) Stauffer and Jayleen (Cory) Smith, both of Markle. He was a proud grandpa to 9 grandchildren; Jake Hazelwood, Daniel Stauffer, Michael Stauffer, Joseph Stauffer, Kaylee Patterson, Reilly Stauffer, Lucas Stauffer, Lily Smith and Lora Smith and 3 great-grandchildren, Sawyer, Elias & Harper Patterson. Jay is also survived by a brother, Carl Stauffer of Bluffton. He is preceded in death by his parents, his wife, a son Christopher Dennis Stauffer, a granddaughter, Addison Ann Stauffer, a brother, Bob Stauffer, a sister, Phyllis Bauermeister, a brother, Jim Stauffer and a sister, Barbara Lockwood. Funeral services will be held at 10:30 A.M. on Friday (July 31, 2020) at the Markle United Methodist Church with Pastor Dan Hyer officiating. Burial will follow at the Markle Cemetery. Calling hours will be held from 3 to 8 P.M. on Thursday at the Thoma/Rich, Lemler Funeral Home in Bluffton and for one hour prior to the service at the church on Friday. Memorials may be made to the American Kidney Foundation. The safety of the family and all visitors is our utmost priority. For everyone’s safety, we ask that you practice social distancing. Masks are required for visitation and for Jay’s service at the church. We appreciate your cooperation and patience. Funeral arrangements have been entrusted to the care of the Thoma/Rich, Lemler Funeral Home in Bluffton. Friends can send online condolences to the family at www.thomarich.com.

The family of Gerald "Jay" Stauffer created this Life Tributes page to make it easy to share your memories.

Gerald “Jay” Stauffer, 81 of Markle, passed away on Sunday evening,...

Send flowers to the Stauffer family.