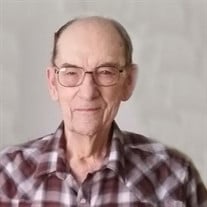 George L. Bailey, 91, of Winona Lake and a former Bluffton resident, passed away at 8:33 P.M. on Tuesday, May 23, 2017, at the Warsaw Hospital. He was born on December 24, 1925 in Jay County, Indiana to Peter D. & Mary S. (Myers) Bailey. A longtime Wells County resident, George served our country in the United States Army during World War II, where he received two purple heart metals after being injured during combat in France. He went on the Honor Flight with his daughter Lu Ann, to see his World War II Memorial. He retired as the service manager for Textron Micro Precision after 22 years of service. On December 1, 1945 in Bluffton, George and Martha R. (Swagart) were married. She precedes him in death on March 21, 2015. He is survived by a son Robert A. (wife Barbara) Bailey of Queen Creek, Arizona and a daughter Lu Ann (Ed) Christoffel of Warsaw, along with grandchildren: Jeremiah Bailey, John (Crystal) Wilenski of Orlando, FL, Jeff Wilenski of Key West, FL, Mary Beth Miller of Ossian, Chad (Cristina) Christoffel and Nathan (Amy) Christoffel both of Pierceton, along with 6 great-grandchildren and 2 great-great-grandchildren. He is also survived by a brother & two sisters; Leo Bailey of Daytona Beach, FL, Phyllis Balsiger of Phoenix, AZ and Shirley Hoffman of Decatur, IN A funeral service to celebrate George’s life will be held at 3:00 P.M. on Tuesday (May 30, 2017) at the Thoma/Rich, Lemler Funeral Home in Bluffton. Pastor Gary Aupperle will officiate. Calling hours will be held from 1 to 3 P.M. prior to the service. Burial will follow at Stahl Cemetery in Bluffton. Military honors by the United States Army Honor Guard and the American Legion Post #111 of Bluffton will honor George’s service to our country at the cemetery. Memorials may be made to Honor Flight of Northeast Indiana. Funeral arrangements have been entrusted to the care of the Thoma/Rich, Lemler Funeral Home in Bluffton. Friends can send online condolences to the family at www.thomarich.com.

The family of George L Bailey created this Life Tributes page to make it easy to share your memories.

Send flowers to the Bailey family.