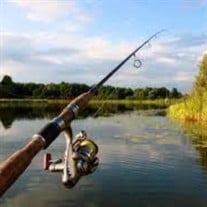 Gary L. “Hoot” Gibson, Sr., 78 of Bluffton, passed away Thursday, May 13, 2021 at Lutheran Hospital in Fort Wayne. Hoot was born on April 3, 1943 in Fort Wayne to William & Lola (White) Gibson. He was a 1961 graduate of South Side High School. After graduation, he started at International Harvester as a journeyman machine repairman apprenticeship program and continued with the company until 1983, as a tool & die maker. He then worked from Simpson Industries as a Machine Repair Foreman until his retirement. After retirement, he delivered trucks for Nesco until his final retirement in January 2019. Hoot spent most of his adult life on Coldwater Lake, where he taught his kids and many neighbor kids how to water ski. He enjoyed fishing and shared this love with his sons and grandsons. On June 28, 1964, Hoot and Jayne E. “Sam” (Geisel) Gibson were married. Together they enjoyed spending their Springs in Fort Myers Beach, Florida with good friends for over 20 years. Survivors include his wife, Sam of Bluffton, a daughter Julie (Dave) Penrod of Bluffton, Gary (Sue) Gibson, Jr. of Green Bay, WI and Chris (Michelle) Gibson of Roanoke, four grandchildren; Tiffany (Cody) Stanley, Jeremy (Allie) Penrod, Kyle Gibson and Madison Gibson, and four great-grandchildren; Caymen & Truett Stanley and Gunnar & Emersen Penrod. He is preceded in death by his parents and his brother, William Gibson. Funeral services will be held at 10:30 A.M. on Wednesday, May 19, 2021, at the Thoma/Rich, Lemler Funeral Home in Bluffton with Pastor Sherrie Drake and Jeff Lemler officiating. Calling hours will be held from 4 P.M. to 8 P.M. on Tuesday at the funeral home and for one hour prior to the service on Wednesday. Memorial contributions can be made in his honor to St. Jude Children’s Hospital. The safety of the family and all visitors is our utmost priority. For everyone’s safety, we ask that you practice social distancing. Masks are at your own discretion. We appreciate your cooperation and patience. Funeral arrangements have been entrusted to the care of the Thoma/Rich, Lemler Funeral Home in Bluffton. Friends can send online condolences to the family at www.thomarich.com.

The family of Gary L. "Hoot" Gibson Sr. created this Life Tributes page to make it easy to share your memories.

Send flowers to the Gibson family.