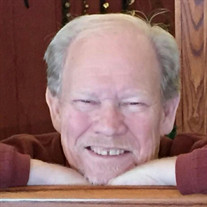 Gary Paul Dickson, 69, of Bluffton passed away Monday morning, December 5, 2016, at the University of Michigan Cancer Center. Gary was born on December 27, 1946 in Pennville, Indiana to Raymond Dickson and Ola (Pyle) Dickson. Gary graduated from Pennville High School in 1964 and served active duty in the United States Navy from 1967 to 1968 during the Vietnam Conflict, along with serving four years in the Naval Reserve. Gary worked at Franklin Electric in Bluffton, Melching Machine Shop in Ossian, and retired as the supervisor of the tool room at Dana Corporation in Fort Wayne. He was an avid Chicago Cubs fan, a golfer, and enjoyed helping the Bluffton Bengal Brigade and supporting the Bluffton High School Show Choir. He was a member of the First United Methodist Church, American Legion Post #111 of Bluffton, Bluffton Elks Lodge and the Wells County Democratic Party. On June 17, 1967 at the First United Methodist Church, Gary and Barb K. (Grimes) were married. Survivors include his wife Barb, along with two daughters; Lisa K. (Chad) Sheets and Laura L. (Ryan) James, all of Bluffton. He was a loving grandpa to six grandchildren: Cole, Carson & Lily Sheets and Rebecca, Sara & Elizabeth James, along with a brother Gerald (Sondra) Dickson of Portland and a sister Ann Williams of Appalachia, Virginia. Preceding him in death were brothers Duane Dickson, Neil Dickson, and sister, Dorothy Dawson. A service to celebrate Gary’s life will be held at 10:30 a.m. on Saturday, December 10, 2016, at the First United Methodist Church in Bluffton. Pastor Bruce Holland and Pastor Steve Bard will officiate. Burial will follow at Elm Grove Cemetery in Bluffton with military honors by the American Legion Post #111 of Bluffton and the United State Navy Honor Guard. Calling hours will be held from 2 to 8 on Friday at the Thoma/Rich, Lemler Funeral Home in Bluffton, and for one hour prior to the service Saturday at the church. An Elks Memorial Service will be held at the conclusion of calling hours, at 8 p.m on Friday in the funeral home. Memorials may be made in Gary’s memory to the University of Michigan Cancer Center for Myelofibrosis Research. Gary’s arrangements have been entrusted to the care of the Thoma/Rich, Lemler Funeral Home in Bluffton. Friends can send online condolences to the family at www.thomarich.com

The family of Gary Paul Dickson created this Life Tributes page to make it easy to share your memories.

Send flowers to the Dickson family.