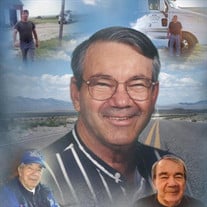 Gary Lee Boone, Sr., 83 of Montpelier, passed away on Sunday morning, October 11, 2020 at Swiss Village in Berne. He was born on March 27, 1937 in Lewis, Indiana to Wayne Renzo & Julia (Biggs) Boone. He graduated from Sullivan High School in 1956. Gary worked with his family in the logging and trucking business for many years. He drove semi-trucks, worked as a terminal manager and as a security guard before he retired in 2011. He was a talented mechanic and could fix almost anything! He enjoyed watching John Wayne westerns and his favorite pastime was spending time with his grandchildren. He was a member of the First Baptist Church in Montpelier. Gary and Anne (Wrestler) were married on December 8, 1978 in Buffalo, Indiana. Survivors include his wife Anne of Montpelier and his children; Gary Lee (Rhonda) Boone, Jr. of Shelburn, IN, Bill (Pam) Boone of Sullivan, IN, Cheryl (Bill) Martin of Shelburn, David Boone of Eureka, CA., Keith (Casey) Boone of Bryant, Carol (John) Felger of Keystone along with several grandchildren and great-grandchildren. Gary is also survived by a sister Betty (Bob) Tarrh of Shelburn, IN. Gary is preceded in death by his parents, a son Jimmy Wayne Boone, 4 brothers, Ralph, Don, Terry & Ron Boone and a sister, Gale Boone. Funeral services will be at 10 A.M. on Friday (October 16, 2020) at the First Baptist Church in Montpelier, with Pastor Jeremy Cowin officiating. Burial will follow at I.O.O.F Cemetery in Montpelier. Calling hours will be held from 3 to 7 P.M. on Thursday at the Thoma/Rich, Lemler Funeral Home in Bluffton and for one hour prior to the service on Friday at the church. Memorials may be made in Gary’s memory to the First Baptist Church in Montpelier or to the Alzheimer’s Association. The safety of the family and all visitors is our utmost priority. For everyone’s safety, we ask that you practice social distancing. Masks are required for visitation and for Gary’s service. We appreciate your cooperation and patience. Funeral arrangements have been entrusted to the care of the Thoma/Rich, Lemler Funeral Home in Bluffton. Friends can send online condolences to the family at www.thomarich.com.

The family of Gary Lee Boone Sr. created this Life Tributes page to make it easy to share your memories.

Send flowers to the Boone family.