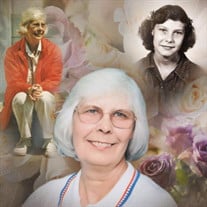 Garnet L. Bulger 84, a longtime resident of Bluffton, passed away Wednesday morning January 19, 2022 at her daughter’s home in Warsaw. She was born on December 7, 1937 in Geneva, Indiana to William & Ruth (Chrisman) Fravel. Garnet was a Girl Scout, the Captain of the Majorettes, and graduated from Geneva High School with the class of 1955. On May 15, 1955 in Geneva, Garnet married Thomas N. Bulger. She was a homemaker and enjoyed horses. She worked at Wells Community Hospital, retiring in 2000. Tom and Garnet were married for 50 years before he preceded her in death in 2005. Survivors include a son, Thomas L.(Brenda) Bulger of Milford; three daughters, Sally (Bruce) Vena of Mishawaka, Julie A. Harwood of Warsaw, Joni (David) De La Fuente of Milford. Garnet was a loving Grandma to 13 Grandchildren, 20 Great-Grandchildren and 1 Great-Great Granddaughter. She is also survived by siblings; Madeline Henley of Geneva, Richard (Sandy) Fravel of Geneva. She is preceded in death by her parents, husband Thomas N. Bulger, and siblings Charles Fravel, Dorothy Madden, Agnes Stewart and Robert Fravel. Funeral services for Garnet will be at 1P.M. Monday, January 24, 2022 at the Thoma/Rich, Lemler Funeral Home with Rev. Lyle Breeding officiating. Friends may visit with the family from 11A.M. – 1P.M. prior to the service. Burial will follow at Fairview Cemetery in Bluffton.. You may view the service from the comfort of your home utilizing a Zoom Meeting. You can log in after 12:45 P.M. on Monday and use the Zoom Meeting I.D. #895 9774 8615. Memorials may be made to Our Daily Bread Ministries. Funeral arrangements have been entrusted to the care of the Thoma/Rich, Lemler Funeral Home in Bluffton. Friends can send online condolences to the family at www.thomarich.com.

Garnet L. Bulger 84, a longtime resident of Bluffton, passed away Wednesday morning January 19, 2022 at her daughter&#8217;s home in Warsaw. She was born on December 7, 1937 in Geneva, Indiana to William & Ruth (Chrisman) Fravel. Garnet was... View Obituary & Service Information

The family of Garnet L. Bulger created this Life Tributes page to make it easy to share your memories.

Send flowers to the Bulger family.