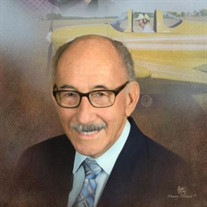 G. Douglas Davis, 81 of Bluffton passed away Thursday morning, December 5, 2019, at Lutheran Hospital in Fort Wayne. Born on July 14, 1938 in Salamanca, New York to Walter W. Davis and Laura Jane (Reynolds) Davis. Doug was raised in Jamestown, NY, where he was a graduate of Falconer High School and studied at Nyack College, Nyack, NY. He attended Penn State University where he studied Architectural/Structural Engineering and served in the United States Air Force. Doug was a self-employed Industrial Marketing Consultant. He is a former member of the First Church of the Nazarene and currently First Reformed Church in Bluffton. Doug was a life-long singer. He liked barbershop and most recently sang southern gospel with his son Brad in The Chapel Quartet for seven years. He enjoyed flying, snow and water skiing, along with classic British motorcars. On November 16, 1973 in Farmington Hills, MI, Douglas and June Violet (Pope) Reading were married. Survivors include his wife June of Bluffton and a son Brad (Brenda) Davis of Fort Wayne, along with two stepdaughters; Joanne D. Schroeder and Julie Anne Foxx both of Bluffton. He was the proud grandfather to 6 grandchildren; Jacob (Andrea) Foxx, Laura (Andrew) Richardson, Patrick (Anna) Davis, Jason (Karena) Schroeder, Ian (Courtney) Schroeder and Devin (Lindsay) Schroeder, along with 9 great-grandchildren, and one on the way very soon. He is preceded in death by his parents. A service to celebrate Doug’s life will be held at 2:00 P.M. on Saturday (Dec. 14th) at the Thoma/Rich, Lemler Funeral Home in Bluffton with Dr. Bryson “Gene” Bell officiating. Friends are encouraged to visit with the family from 12 Noon to 2 P.M. on Saturday, prior to the service. Memorials may be made to American Heart Association or First Reformed Church. Inurnment will take place at Covington Memorial Gardens in Fort Wayne at a later date. Funeral arrangements have been entrusted to the care of the Thoma/Rich, Lemler Funeral Home in Bluffton. Friends can send online condolences to the family at www.thomarich.com.

The family of G. Douglas Davis created this Life Tributes page to make it easy to share your memories.