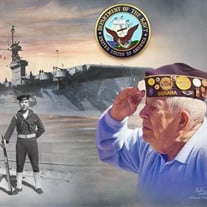 Francis L. “Link” Holmes, 94, of Bluffton passed away on Sunday evening, January 26, 2020, at Signature Health Care in Bluffton. Francis was born on April 13, 1925 in Lancaster Township, Wells County to Robert Holmes, Jr. and Edna H. (Johnson) Holmes. A 1943 graduate of Bluffton High School, he served his county in the United Sates Navy from 1943 to 1950 during World War II. He was honorably discharged as a Seaman 1st Class and returned home and graduated from Indiana Vocational College in Fort Wayne in 1958. Francis worked as a pattern maker at Sterling Casting for 35 years and retired in 1989. He was a member of the American Legion Post #111 of Bluffton, Bluffton Moose Lodge, Bluffton Lodge #145 F.&A.M. since 1959 and the Fort Wayne Scottish Rite. On March 5, 1948 in Bluffton, Francis “Link” married Wilda I. (Brickley) Holmes were married and she preceded him in death on June 5, 2015. Survivors include his children; Terry D. (Joyce) Holmes of Churubusco, IN, Carey L. (Susan) Holmes of Fort Wayne, Jeffrey L. (Bobbi Dent) Holmes of Fort Wayne, Pamela S. (Dennis) Bober of Tampa, FL, Kevin L. (Janis) Holmes of Bluffton, Robin K. (Denette) Holmes of Bluffton along with 16 grandchildren and 20 great-grandchildren. Francis is preceded in death by a son Timothy D. Holmes, two granddaughters: Sara Elaine Holmes and Gabrielle Diane Holmes, a brother Dewayne “Pete” Holmes and a sister Patricia "Pat" Borror. Funeral Services will be held at 10:30 A.M. on Friday (January 31,2020) at the Thoma/Rich, Lemler Funeral Home in Bluffton with Barry Crosbie officiating. Calling hours will be held from 2 to 8 on Thursday and for one hour prior to the service. A Masonic Memorial service will take place at 8 P.M. on Thursday, at the conclusion of calling hours. Burial will take place at Elm Grove Cemetery in Bluffton. Military honors will be performed by the United States Navy Honor Guard and the American Legion Post #111 Honor Guard. Memorials may be made to Friends Who Care Cancer Relief Foundation. Funeral arrangements have been entrusted to the care of the Thoma/Rich, Lemler Funeral Home in Bluffton. Friends can send online condolences to the family at www.thomarich.com.

The family of Francis L. "Link" Holmes created this Life Tributes page to make it easy to share your memories.

Send flowers to the Holmes family.