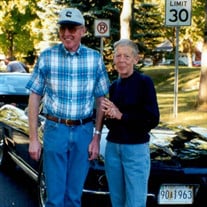 Floyd A. Lobsiger, 80 of Bluffton, passed away on Tuesday, October 6, 2020, at Signature Care of Bluffton. Floyd was born on December 20, 1939 in LaGrange, IN to Loren N. & Lillie A. (Powers) Lobsiger. On December 17, 1961, Floyd and Sally A. Garrett were married. She preceded him in death on October 1, 2018. Floyd graduated from Lancaster High School in 1958 where he played basketball, participated in track/field and band. Known for his determination, hard-work and attention-to-detail, Floyd was a true craftsman in auto body repair and restoration. Floyd began full-time employment with his father, Loren, at Loren’s Body Shop in Bluffton in 1959. Floyd became a co-owner with his brother Denny in 1975 and eventually retired in 2005. He enjoyed attending car shows where he won many awards. Floyd and Sally especially enjoyed the Bluffton Street Fair car show and parade with his 1963 Corvette and his 1967 Camaro. Floyd enjoyed many fun times at Adams Lake and multiple fishing trips to Canada with family and friends. He hand crafted his own remote-control airplanes and restored bicycles and pedal cars. He enjoyed riding motorcycles and made several trips to the Smoky Mountains with his son, Kent. In his mid-40’s, Floyd took up distance running and continued to run mini-marathons and 10-Ks into his 60’s. He regularly supported and participated in the Parlor City Trot in Bluffton. Floyd also participated in the Rock Steady Boxing Program where he formed many close friendships. The highlight of his retirement was time spent with granddaughter Anabel. He is survived by his two children, Kent Lobsiger of Nashville, IN and Amy Lobsiger of Ferndale, MI, one granddaughter, Anabel Sicko of Ann Arbor, MI, along with two brothers, Dennis (Wanda) Lobsiger of Bluffton and Michael (Beverly) Lobsiger of Punta Gorda, FL. He is preceded in death by his parents, his wife, Sally and son-in-law, Dan Sicko. Friends are invited to participate in a last Memorial Tribute Cruise for Floyd and Sally through town with the family that will depart from the Thoma/Rich, Lemler Funeral Home on Friday, October 16, 2020 at 1 P.M. Classic Cars and Hot Rods are welcome and appreciated. A graveside service will be held at 1:30 P.M. on Friday (Oct. 16, 2020) at Elm Grove Cemetery in Bluffton with Dr. Bryson “Gene” Bell officiating. Memorials may be made to Bluffton Parks Department for the Rock Steady Boxing Program. The safety of the family and all visitors is our utmost priority. For everyone’s safety, we ask that you practice social distancing and wear a mask at the funeral home and cemetery for the service. Funeral arrangements have been entrusted to the care of the Thoma/Rich, Lemler Funeral Home in Bluffton. Friends can send online condolences to the Lobsiger family at www.thomarich.com.

The family of Floyd Lobsiger created this Life Tributes page to make it easy to share your memories.

Floyd A. Lobsiger, 80 of Bluffton, passed away on Tuesday, October...

Send flowers to the Lobsiger family.