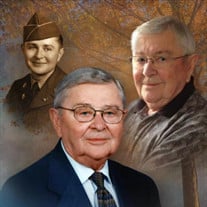 Floyd Wayne DeBolt, 93, of Bluffton, IN went to heaven on Monday morning January 10, 2022, in his home at the River Terrace Retirement Community. He was surrounded by loved ones and will be greatly missed. Floyd was born December 14, 1928 in Berne, IN to Homer W. and Clara Margaret (Linn) DeBolt. He was a 1946 graduate of the Jefferson High School in Adams County. Floyd served in the Korean War from 1950 to 1952 in the 64th Heavy Tank Division achieving rank of Tank Platoon Sergeant. Floyd was a natural salesman with a good sense of humor and sold furniture for over 60 years at Sears & Roebuck in Fort Wayne and Gerber Furniture in Bluffton. Floyd was a devoted, long-time active member of the Markle Church of Christ serving as Trustee and Deacon for over 40 years. He enjoyed volunteering his time pruning many shrubs that landscaped the church grounds. Floyd married Marcella E. Tyner on April 14, 1951, in Berne, IN. They raised their three boys on their DeBolt Farm. Floyd and Marcella celebrated 69 years of marriage before she preceded him in death November 12, 2020. Survivors include three sons; Larry (Peg) DeBolt of Bluffton; David (Sheri) DeBolt of Markle; and Michael (Marcia) DeBolt of Pinehurst, North Carolina, along with five grandchildren: Amy, Jeff, Renae, Adam, and Mari; nine great-grandchildren: Alex, Amie, Abby, Isabella, Eldon, Jackson, Hugo, Arlo, and Isla. To his family he was Brother, Husband, Dad, Grandpa, Great Grandpa, Uncle Floyd and will be remembered for his love, selfless generosity, always putting others first, sharing his life experiences and wisdom in good and tough times. Floyd is preceded in death by his parents, his wife Marcella, a sister Esther Ann DeBolt and brothers Gerald and Marion DeBolt. A private Celebration of Life service officiated by Gerald Moreland will take place at the Thoma/Rich, Lemler Funeral Home in Bluffton. A private family burial will follow at Hoverstock Cemetery in Zanesville, IN with military honors provided by the U.S. Army Honor Guard and the American Legion Post #111 Honor Guard. Friends and family can watch Mr. DeBolt’s service using a live stream Zoom option open to the public. You can login at 10:15 A.M. on Friday, January 14, 2022 for the service starting at 10:30 A.M., by using Zoom ID Meeting # 894 9431 6091. Memorials may be made in Floyd’s memory to Emanuel Mexico Mission, where his son David and his wife Sheri were missionaries for 30 years. Contributions may be mailed to the Funeral Home. Funeral arrangements have been entrusted to the care of the Thoma/Rich, Lemler Funeral Home in Bluffton. Friends can send online condolences to the DeBolt family at www.thomarich.com.

Floyd Wayne DeBolt, 93, of Bluffton, IN went to heaven on Monday morning January 10, 2022, in his home at the River Terrace Retirement Community. He was surrounded by loved ones and will be greatly missed. Floyd was born December 14, 1928 in... View Obituary & Service Information

The family of Floyd Wayne DeBolt created this Life Tributes page to make it easy to share your memories.

Floyd Wayne DeBolt, 93, of Bluffton, IN went to heaven on Monday...

Send flowers to the DeBolt family.