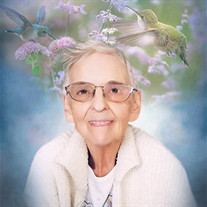 Evelyn I. Stammen, 87, of Bluffton and a former Fort Recovery resident, passed away on Saturday afternoon, May 11, 2019, at Lutheran Hospital in Fort Wayne. Evelyn was born on December 22, 1931 to John “Jack” & Edith (Bowman) Arnold. She lived in Jay and Wells County most of her life and graduated from Bluffton High School in 1949 and sang in the Bluffton Glee Club. Evelyn worked at Franklin Electric and as a nurse’s aide at the Caylor-Nickel Clinic. In her free time, she enjoyed crocheting and singing and taking care of her birds. Evelyn married Gerald J. Stammen, Sr. on March 29, 1974 in Wells County and he preceded her in death on December 24, 2007. Survivors include her children; John Stammen of Bluffton, Jessica (Randy) Smith of Greenville, Ohio, Lena (Todd) Cleeves of Van Wert, Ohio, Gerald (Michelle) Stammen, Jr. of Fort Recovery, Ohio along with 10 grandchildren and 4 great-grandchildren. She is also survived by two sisters; Shirley Lyons of Roanoke and Phyllis (Harold) Harness of Plum Tree, Indiana. Evelyn is preceded in death by her parents, husband and two sons, Richard & James Johnson along with two brothers, Larry & Bill Arnold. Visitation will be held from 3 to 8 P.M. on Wednesday at the Thoma/Rich, Lemler Funeral Home in Bluffton and for one hour prior to the service. Funeral service will take place at 10:00 A.M. on Thursday (May 16, 2019) at the Thoma/Rich, Lemler Funeral Home in Bluffton with Rev. Lyle Breeding officiating. Burial will take place at Elm Grove Cemetery in Bluffton. Memorials may be made to American Cancer Society. Funeral arrangements have been entrusted to the care of the Thoma/Rich, Lemler Funeral Home in Bluffton. Friends can send online condolences to the family at www.thomarich.com.

The family of Evelyn I. Stammen created this Life Tributes page to make it easy to share your memories.

Evelyn I. Stammen, 87, of Bluffton and a former Fort Recovery...

Send flowers to the Stammen family.