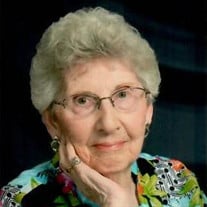 Evelyn D. Morrissey, 91, of Bluffton passed away early Wednesday morning, January 1, 2020, at Christian Care Retirement Community in Bluffton. Evelyn was born on October 16, 1928 in Bluffton and was the daughter of O.D. & Marjorie (Little) Haflich. A 1946 graduate of Bluffton High School, Evelyn lived in Decatur from 1952 to 2003, when she moved back to Bluffton. Evelyn and Robert Dale Morrissey were married in Bluffton at St. Joseph Catholic Church on Valentine’s Day in 1952 and he preceded her in death on December 10, 2013. They were married for 61 years. She was a parishioner of St. Joseph Catholic Church where she was a choir member and a former parishioner of St. Mary Catholic Church in Decatur, where she served in the choir for 25 years along with her membership in Psi Iota Xi Sorority. Evelyn is survived by 4 children: Nancy (Larry) Leitz, Janet (Doug) Lehman and Michael (Jill) Morrissey, all of Bluffton and Patrick Morrissey of Fort Wayne; 4 grandchildren; Nathan (Erica) Lehman of Bluffton, Nicole (Doug) Miller of Fort Wayne, Gregory (Stacy) Lehman of Bluffton and Matthew (Jordan) Morrissey of Zionsville and 9 great-grandchildren; Carter & Cadence Lehman; Lynae & Samuel Miller; Hunter & Colson Lehman; Cale, Hattie, and Eloise Morrissey. A Mass of Christian Burial will be celebrated at 11 A.M. on Saturday (January 4, 2020) at St. Joseph Catholic Church in Bluffton. Father David Violi and Father Steve Colchin will be the celebrants and burial will follow at Elm Grove Cemetery in Bluffton. Visitation will be held from 9 to 11 A.M. on Saturday, prior to mass at St. Joseph Catholic Church. In Lieu of flowers, memorials may be made to St. Joseph Catholic Church or Wells County Creative Arts Council. Funeral arrangements have been entrusted to the care of the Thoma/Rich, Lemler Funeral Home in Bluffton. Friends can send online condolences to the family at www.thomarich.com.

The family of Evelyn D. Morrissey created this Life Tributes page to make it easy to share your memories.

Send flowers to the Morrissey family.