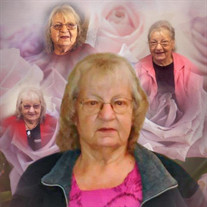 Eunice F. West, 76 of Bluffton, passed away on Monday evening, April 18, 2022, at Parkview Randallia Hospital in Fort Wayne. She was born on December 29, 1945, in Happy, Kentucky to Fred Burns, Sr. & Polly (Combs) Burns. Eunice worked at Corning Glass Works and at several local nursing homes including West Haven, Swiss Village and Meadowvale Health & Rehab Center. She also worked for many years as a home health care aide. She retired from Bluffton Rubber Company. Eunice married Raymond West, Jr. on July 14, 1976, in Bluffton and he preceded her in death on January 4, 2012. On November 21, 2015, she married Donald Lee West and he preceded her in death on September 26, 2021. Eunice is survived by her loving children; Robert Barton, Terry Barton, both of Bluffton, Melissa “Lisa” (Bill) Grogg of South Whitley, Jason Barton of Anderson, stepchildren; Tammy King, Angela West-Waldron, both of Bluffton, Stacey West of Warren, Kelly (David Jr.) Gardner of Bluffton, along with 23 grandchildren and 36 great-grandchildren. She is also survived by her siblings; Adrian (Doris) Burns of Bluffton, Denver (Tammy) Burns of Georgia, Danny (Lisa) Burns of Florida, Mary (Roger) Rough of Geneva, Joyce Morgan, Christine Eisenhut and Cora Meadows, all of Bluffton. Eunice is preceded in death by her husbands, and siblings; Fred “Sonny” Burns, Jr., Phillip Burns, Margaret Bailey, Paula McCollum, Carol Hurt and Charlene Gobernatz. Funeral Services will be held at 10:30 A.M. on Monday (April 25, 2022) at the Thoma/Rich, Lemler Funeral Home in Bluffton with Brother Bobby Thomas officiating. Burial will follow at Fairview Cemetery in Bluffton. Memorials may be made to the family. Visitation will be from 2 P.M. to 8 P.M. on Sunday at the funeral home and for one hour prior to the service. Funeral arrangements have been entrusted to the care of the Thoma/Rich, Lemler Funeral Home in Bluffton. Friends can send online condolences to the family at www.thomarich.com.

The family of Eunice F. West created this Life Tributes page to make it easy to share your memories.

Eunice F. West, 76 of Bluffton, passed away on Monday evening,...

Send flowers to the West family.