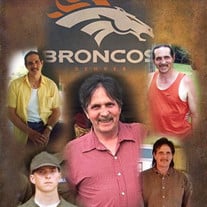 Eugene A. Bushee, 60, of Ossian, passed away Sunday evening, June 16, 2019 at Lutheran Hospital. He was born on December 21, 1958 in Fort Wayne, Indiana to John E. & Irene (Herman) Bushee. Eugene graduated from Norwell High School in 1977. He grew up working on the family farm. After graduation, he joined the U.S. Air Force for four years, serving in Germany. Eugene worked for Goldshield Fiberglass in Decatur for the last 15 years. He was a member of the NRA and enjoyed shooting and fishing. Eugene was an avid NASCAR fan, and enjoyed spending time with his grandchildren and taking them to the Fort Wayne Children’s Zoo. He loved to cook, specializing in bringing Chex Mix and green beans to every family event. Eugene is survived by his father; John E. Bushee of Sebring, FL, four children; Brandi (Josh) Duncan of Columbia City, Tanya (David) Petras of Angola, Tara (Branch Wilkinson) Schuman of Columbia City, and Tyler A. Bushee of Ossian, along with 11 grandchildren; Taylor, Hope, Madaya, Dylan, Carson, Grady, Wylo, Derek, Bentley, Dakota and AnnaBelle. He is also survived by 4 siblings; Steve (Sally) Bushee of Vermillion, SD, Janice (Stan) Buzzelle of Peoria, AZ, Gary (Regina) Bushee of Leesburg, FL and Kevin (Dawn) Bushee of Gainesville, FL. Eugene is preceded in death by his mother, Irene (Herman) Bushee and his wife, Lynn (Clark) Bushee. A service to celebrate Eugene’s life will be held at 6:00 P.M. on Monday, June 24, 2019 at the Thoma/Rich, Lemler Funeral Home in Bluffton. Calling hours will be held from 4 to 6 on Monday prior to the service. Memorials may be made to the grandchildren’s education fund, payable to Tanya Petras. Funeral arrangements have been entrusted to the care of the Thoma/Rich, Lemler Funeral Home in Bluffton. Friends can send online condolences to www.thomarich.com.

Eugene A. Bushee, 60, of Ossian, passed away Sunday evening, June 16, 2019 at Lutheran Hospital. He was born on December 21, 1958 in Fort Wayne, Indiana to John E. & Irene (Herman) Bushee. Eugene graduated from Norwell High School in 1977. He... View Obituary & Service Information

The family of Eugene A. Bushee created this Life Tributes page to make it easy to share your memories.

Send flowers to the Bushee family.