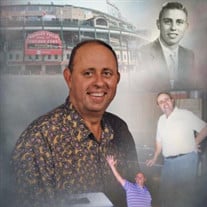 Ernie W. Dohrman 83 of Bluffton passed away Thursday morning February 3, 2022 at Markle Health and Rehabilitation Center. Ernie was born January 17, 1939 in Woodburn, IN to Norman and Marguerite (Johnson) Dohrman. Ernie was a 1956 graduate of Lancaster High School. Ernie worked for Skiles Company for 22 years before retiring from Ormsby Trucking. On September 28, 1957 in Bluffton Ernie and Arlene A. Gentis were married. They shared 48 years of marriage until her passing on March 22, 2005. Ernie loved baseball, and was involved in Bluffton Youth Baseball for many, many years. He also loved football, and college basketball. He was a huge Cubs fan as well as a Chicago Bears and Indianapolis Colts fan. He loved playing card games and could rarely be beaten in Euchre. He is survived by his children; Douglas E. (Kris) Dohrman, of Bluffton, IN, Jefferey A. Dohrman of Berne, IN, David E. (Cathy) Dohrman of Bluffton, IN, and Amy J. (Scott) Kocks of Roanoke, IN, 11 grandchildren; Bruce R. (Jaimi) Dohrman of Roanoke, IN, Colby L. (Mickey) Williams of Woodstock, GA, Cameron D. Dohrman of Bluffton, IN, Seth Eisaman of Melbourne, FL, Amanda J. (Jason) Brown of New Palestine, IN, Evan M. (Lauren) Strain of Royal Oaks, MI, Ashley M. (Ryan) Langley of Bloomington, IN, Lindsey N. (Jason) Boring of Muncie, IN, Heather K. (Mark) Hoeppner of Fort Wayne, IN, Jennifer J. Byrd of Bluffton, IN, Matthew N. Byrd of Fort Wayne, IN, 18 great-grandchildren, Jaxson, Addison, Aubree, Colt, Barrett, Tucker, Nolan, Harper, Beckett, Lily, Rebekah, Abigail, Thomas, Charlie, Sam, Cameron, Cylie, and Cyndall his siblings Merlin (Gloria) Dohrman, of Keystone, IN, Norman (Mary Lou) Dohrman of Roanoke, IN, and Cindy McVay of Marion, IN. Ernie was preceded in death by his parents, his wife Arlene A. Dohrman and a great-granddaughter Caitlyn Pyle. Funeral services will take place at 1 P.M. on Tuesday, February 8, 2022 at the Thoma/Rich, Lemler Funeral Home in Bluffton with Tony Garton officiating. Burial will follow in Six Mile Cemetery in Bluffton. Visitation will be held from 10 A.M. to 1 P.M. Tuesday at the funeral home, prior to the service. Memorial may be made to the Bi-County Services in Bluffton. Funeral arrangements have been entrusted to the care of the Thoma/Rich, Lemler Funeral Home in Bluffton. Friends can send online condolences to the family at www.thomarich.com.

Ernie W. Dohrman 83 of Bluffton passed away Thursday morning February 3, 2022 at Markle Health and Rehabilitation Center. Ernie was born January 17, 1939 in Woodburn, IN to Norman and Marguerite (Johnson) Dohrman. Ernie was a 1956 graduate of... View Obituary & Service Information

The family of Ernie W. Dohrman created this Life Tributes page to make it easy to share your memories.

Send flowers to the Dohrman family.