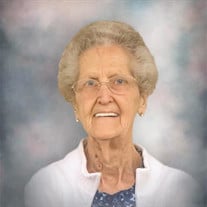 Erma R. Redding, 91 of rural Bluffton, passed away on Friday morning, April 5, 2019, at Bluffton Regional Medical Center. She was born in Markle, Indiana on May 27, 1927 to Everett & Ruth (Birney) Lund. She graduated from Rock Creek High School in 1945. She was a homemaker and helped her husband on the family farm. Erma was a member of the Buckeye Christian Church and recently attended the First Reformed Church in Bluffton. She was an active member of various community and church groups. On October 19, 1945 in Markle, Erma married Charles E. “Charlie” Redding and together as a family, they recently celebrated their 73rd wedding anniversary. He preceded her in death on October 23, 2018. Survivors include her daughter, Jan Pearson of Bluffton and a grandson, Justin Pearson of Fort Wayne. She is preceded in death by a son, Richard Redding and a grandson, Todd Mann along with her siblings; Walter Lund, Bernice Bruss, Beulah Stout and her twin sister, Avon Stephans. Funeral services will be held at 10:30 A.M. on Tuesday (April 9, 2019) at the Thoma/Rich, Lemler Funeral Home in Bluffton with Dr. Bryson E. “Gene” Bell officiating. Burial will follow at Sparks Cemetery in rural Wells County, close to the family farm. Calling hours will be held from 5 to 8 on Monday (April 8, 2019) at the Thoma/Rich, Lemler Funeral Home in Bluffton, and for one hour prior to the service. Memorials may be made to First Reformed Church. Funeral arrangements have been entrusted to the care of the Thoma/Rich, Lemler Funeral Home in Bluffton. Friends can send online condolences to the family at www.thomarich.com.

The family of Erma R. Redding created this Life Tributes page to make it easy to share your memories.

Erma R. Redding, 91 of rural Bluffton, passed away on Friday...

Send flowers to the Redding family.