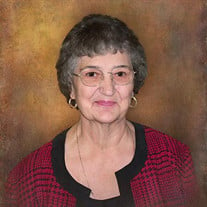 Emma Fay DeArmond, age 81, of Bluffton, Indiana, passed away from this life to her eternal rest on Sunday, September 16, 2018 at the Markle Health and Rehabilitation Center. She was born to Ivan and Erma (Emley) Holloway in Bluffton, Indiana on April 12, 1937. Her parents preceded her in death. She married Charles DeArmond on November 17, 1957. Charles preceded her in death. Emma Fay was a member of Epworth Methodist Church and loved the Lord. She leaves behind sons Randy DeArmond of Bluffton, Steven DeArmond and wife Rose of Fort Wayne and daughter Teresa Wagner and husband Alan of Rockford, MI. She also leaves behind five grandchildren, Amanda Starkel and her husband Brian of Indianapolis, Jared DeArmond and his wife Korah of Decatur, Daniel DeArmond of Fort Wayne, Sara Wagner and Jenna Wagner of Rockford, MI, and Great-Grandchild, Barrett DeArmond. Emma Fay also leaves behind her sister Julia Ball, brother Rex Holloway and his wife Pat, and sister in-law Anna Holloway of Bluffton, and brother-in-law Dorrence Lewis of Fort Wayne. Emma Fay also leaves behind her brother-in-law Dick DeArmond and his wife Beverly of Bluffton, and a sister-in-law Doris DeArmond of Fort Myers FL., and numerous nieces, nephews and cousins. Emma Fay was preceded in death by her sister Jane Lewis and brother Ivan Holloway, her sister-in-law Rosamond and brother-in-law Richard Johnson of Ossian, and her brother-in-law Robert DeArmond of Fort Myers, Florida, and sister-in-law Wanda and brother-in-law Floyd Tarr of Phenix, Indiana She was an Avon lady for many years and made many friends. She enjoyed flower gardening, camping and crafting. Emma Fay was a home maker and a devoted wife, mother and grandmother. She stayed busy in retirement watching her grandchildren play sports. In her later years, Emma Fay struggled with the awful disease - Alzheimer’s. The family would like to publicly thank the kind and compassionate care team at the Markle Health and Rehabilitation Center. A service to celebrate Emma Fay’s life will be held at 10:30 a.m. on Thursday (September 20, 2018) at the Thoma/Rich, Lemler Funeral Home in Bluffton. Rev. Marlene Ellis will officiate and burial will follow at Fairview Cemetery in Bluffton. Calling hours will be held from xx p.m. to xx p.m. on Wednesday at the funeral home and for one hour prior to the service on Thursday. In lieu of flowers, memorials may be made to the Alzheimer’s Association and the Parkview Foundation. Friends can send online condolences to the DeArmond family at www.thomarich.com.

Emma Fay DeArmond, age 81, of Bluffton, Indiana, passed away from this life to her eternal rest on Sunday, September 16, 2018 at the Markle Health and Rehabilitation Center. She was born to Ivan and Erma (Emley) Holloway in Bluffton, Indiana... View Obituary & Service Information

The family of Emma Fay DeArmond created this Life Tributes page to make it easy to share your memories.

Send flowers to the DeArmond family.