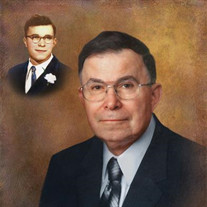 Edward “Ed” C. Davis, 84, of Bluffton passed away at 8:23 a.m. Saturday, December 24, 2016, at Bluffton Regional Medical Center. Ed was born on October 13, 1932 in Fort Wayne to Edward Robert Davis and Hilda (Dilts) Davis. He graduated from Akron High School in 1951, and completed certificate programs at Purdue University. Beginning in 1955, he served in Akron and later Mentone as superintendent and town marshal with responsibilities for water, streets, sewage and police. In 1964, he was appointed water commissioner in Bedford and served there until 1967, when he was appointed district superintendent for Indiana Cities Water Corporation in the communities of New Albany, Jeffersonville and Clarksville. Ed came to Bluffton in 1968 to start his 42 years of service as the Bluffton Utilities Water Supt. and later also as the Electric Supt., retiring in 2010. He was recognized throughout the state for his expertise in water and electric utilities. He received the Dr. John N. Hurty Award from the Northeast District of the American Water Works Association. He was an active member of the American Water Works Association and was awarded the Indiana Sections “Water Wheel” award in 1979 for outstanding utility and association accomplishments. In 1991, Ed was awarded “Life Membership” in the American Water Works Association for 50 years of service. His faith and Christian service throughout his life was very important to him and his family. He taught adult Sunday school classes most of his adult life and was an active member of Grace Baptist Church in Bluffton. On March 12, 1953 in Gilead, Indiana, Ed and Marjorie (Thompson) Davis were married. They shared 53 years together before she preceded him in death on March 26, 2006. Ed is survived by four children: Robert F. (Remdios) Davis of Bluffton, Douglas L. (Susan) Davis of Adrian, MO, Sherri R. (Ted) Harter and Andrew T. (Cindy) Davis, both of Bluffton. He was a loving “PaPaw” to 9 grandchildren: Rachel Davis, Sarah (Jim) Davis, Nathan Davis, Drew (Megan) Davis, Faith (Matthew) Hutchens, Luke (Teresa) Davis, Thad (Allison) Harter, Benjamin Davis and Tory Harter as well as 3 great-grandchildren: Evelyn, Stellen and Malakai Davis. Calling hours will be held on Tuesday (December 27, 2016) from 2 to 8 p.m. at the Thoma/Rich, Lemler Funeral Home, and from 9 to 11 a.m. on Wednesday at the Grace Baptist Church. A service to celebrate Ed’s life will be held at 11 a.m. on Wednesday (December 28, 2016) at Grace Baptist Church in Bluffton. Pastor Douglas McClure will officiate. A graveside service will be held at 2:30 p.m. on Wednesday at Akron Cemetery in Akron, Indiana. Memorials may be made in Ed’s memory to Grace Baptist Church or Family Lifecare of Berne. Funeral arrangements have been entrusted to the care of the Thoma/Rich, Lemler Funeral Home in Bluffton. Friends can send online condolences to the family at www.thomarich.com.

The family of Edward "Ed" C Davis created this Life Tributes page to make it easy to share your memories.