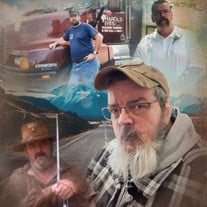 Edward M. “Tiny” Bowley 63, of Uniondale passed away Friday evening February 11, 2022 at Lutheran Hospital of Fort Wayne. Edward was born December 19, 1958 in West Palm Beach, FL to Basil E. Bowley and Ina A. (Long) Gehrig. Edward was a 1975 graduate of Central Nobel High School. He served his country in the U.S. Army. On June 3, 2006 in Fort Wayne Edward married Coralee G. Breedlove. They have shared 15 years of marriage. Edward was a truck driver for 30 + years. He was also Blacksmith, Gunsmith, and took part in many historical reenactments. He also enjoyed the outdoors, camping, hunting and target shooting. He was a member of the NRA along with the American Legion. He is survived by his wife of 15 years Coralee G. Bowley, 5 children; Tabitha (Dan) Jenks of Huntington, Brian (Jennifer) Miller of Athens, GA, Jacoby Gibson of Uniondale, Rhianna Gibson of Bluffton, Keily Gibson of Decatur, three grandchildren Ethan Fitch, Jesse Turner, Natalia Jenks, along with a brother Earl Bowley of Fort Wayne and a sister Staci (David) Love. He was preceded in death by his parents, and 4 brothers Ted Bowley, Brook Bowley, Bing Bowley, and Sidney East. Visitation will be from 4 P.M. to 8 P.M. Thursday, February 17, 2022 at the Thoma/Rich, Lemler Funeral Home in Bluffton. Funeral services will be at 10 A.M. Friday, February 18, 2022 at the Thoma/Rich, Lemler Funeral Home with Pastor Karen Ottjes officiating. Burial will follow in Stahl Cemetery with Military honors provided by the American Legion Post #111 Honor Guard. Memorials may be made to Uniondale United Methodist Church. Funeral arrangements have been entrusted to the care of the Thoma/Rich, Lemler Funeral Home in Bluffton. Online condolences may be made at www.thomarich.com.

The family of Edward M. "Tiny" Bowley created this Life Tributes page to make it easy to share your memories.

Send flowers to the Bowley family.