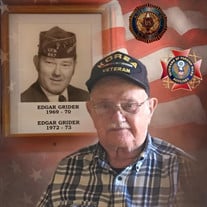 Edgar “Ed” L. Grider, 90 of Bluffton, passed away on Saturday morning, December 11, 2021, at River Terrace Estates in Bluffton. He was born on March 24, 1931 in Albany, Kentucky to Frank & Ruby Arlene (Handcock) Grider and graduated from Central High School in Fort Wayne. Ed served in the United States Army from 1950 to 1951, on the front line during the Korean War. Ed was a proud American! Ed worked as an electrician out of the I.B.E.W., Local 305, for over 50 years on construction sites locally and nationally. He was proud that he remodeled his home on South Main Street in Bluffton. Ed was a member of the V.F.W. # 857 of Fort Wayne, where he served as the Past Commander and District Commander along with his membership in the American Legion Post #111 of Bluffton. On June 13, 1981 in Bluffton, Edgar married Constance I. “Connie” (Hinesley) Grider. Survivors include his wife of 40 years, Connie of Bluffton, along with children; Gary L. Grider of Fort Wayne, Kevin R. (Betty) Grider of Huntington, Terrie (Bill) Esterline of Albion, Traci (Rick) Waggoner of Bluffton, along with 10 grandchildren and 4 great-grandsons and a sister, Loretta Harris of Fort Wayne. He is preceded in death by his son, Kurt A. Grider, daughter, Tonia Rene Furnish and grandson, Richie Grupy and siblings; Mary Watson, John Grider, Mattie Biddlecome, Frank Grider, James Grider, & Donald Grider. Visitation will be held from 4 P.M. to 7 P.M. on Wednesday (Dec. 15, 2021) at the Thoma/Rich, Lemler Funeral Home and for one hour prior to the service. Funeral Services will be held at 10:30 A.M. on Thursday (Dec. 16,2021) at the Thoma/Rich, Lemler Funeral Home in Bluffton with Pastor Steve Sutton officiating. Burial will follow at Fairview Cemetery in Bluffton with military honors by the U.S. Army Honor Guard and the American Legion Post #111 Honor Guard. Memorials may be made to American Legion Post #111 Honor Guard or the V.F.W #857 Honor Guard and can be sent to the funeral home. Funeral arrangements have been entrusted to the care of the Thoma/Rich, Lemler Funeral Home in Bluffton. Friends can send online condolences to the family at www.thomarich.com.

The family of Edgar "Ed" L. Grider created this Life Tributes page to make it easy to share your memories.

Send flowers to the Grider family.