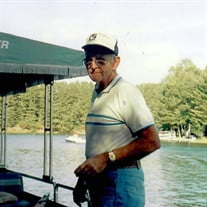 Earl R. “Bob” Sthrome, 93, of London, Ohio passed away on Monday morning, March 16, 2020 at his residence. Bob was born on May 11, 1926 in Hartford City, Indiana to Earl H. & Helen Kathryn (Sibert) Sthrome. He served honorably in the United State Army from 1944 to 1946 in the Rhineland Central Europe where he was awarded a Purple Heart Metal for his service to our country. A toolmaker by trade, Bob worked at Overhead Door in Hartford City and retired from DuPuy in Warsaw, where he lived for many years on Little Chapman Lake. He enjoyed spending the winter in Frostproof, Florida. Bob was a member of the North Winona Church of the Brethren in Warsaw and was currently attending the Columbia Heights United Methodist Church in Galloway, Ohio. On September 16, 1944, Bob married Mary Elizabeth (Landis) and she preceded him in death on August 4, 2000. On October 6, 2001, Bob and Mary Jean (McJunkin) Ball were married. Survivors include his wife Mary Jean Sthrome of London, Ohio and her children; Jeff (Vickie) Ball and Nancy (Roger) Schuler along with 5 grandchildren and 6 great-grandchildren. Bob is also survived by sister-in-laws; Joanne (Clamme) Rea of Hartford City and Norma Gochenour of Orient, Ohio. He was fondly known as “Uncle Bob” to several nieces and nephew throughout Indiana, Ohio, Georgia and Florida. He is preceded in death by his parents, a brother Don and a sister Doris. Family visitation and funeral services will take place. The service will take place at 1 P.M. on Saturday, (March 21, 2020) at the Thoma/Rich, Lemler Funeral Home in Bluffton, with Jeff Lemler officiating. Calling will take place for one hour prior to the service. A public graveside service will be held at approximately 2:30 P.M on Saturday at the Hartford City Cemetery. Memorials may be made to the Honor Flight of Westerville, Ohio. Funeral arrangements have been entrusted to the care of the Thoma/Rich, Lemler Funeral Home in Bluffton. Friends can send online condolences to the family at www.thomarich.com.

The family of Earl R. "Bob" Sthrome created this Life Tributes page to make it easy to share your memories.

Send flowers to the Sthrome family.