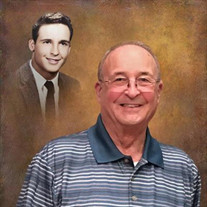 Duncan Lewis White, 81, of Bluffton passed away on Tuesday morning, April 19, 2022, at Swiss Village in Berne. Duncan was born February 16, 1941, to Robert and Margaret White. He married his high school sweetheart, Janice Grove, on August 5, 1961. Janice proceeded him in death in 2014. Duncan held a lifelong career in various auto related businesses, beginning with White’s Filling Station, then Goodyear Tire, and eventually retiring from National Oil and Gas. Duncan and his wife were both avid antique-ers, continuing to work at the Berne Antique Mall until limited by failing health. An active Deacon at First Presbyterian Church in Bluffton, he loved gospel music especially when performed live. He was a talented artist, he enjoyed oil painting and creating wood crafts. Duncan is survived by his children Jeffrey (Jill) White of Matthews, IN, Kendra (Steve) Oglesbee of Houston, TX and a brother, Donald (Bonnie) White of Milford, OH. He also is survived by six grandchildren and nine great grandchildren. He was preceded in death by his parents, his wife Janice, and his sister, Nancy Coryell. Visitation will be held from 4 P.M. to 7 P.M. on Friday, April 22, 2022, at the Thoma/Rich Lemler Funeral Home in Bluffton. A graveside service will be held at 10:30 A.M. Saturday, April 23, 2022, at the Six Mile Cemetery with burial to follow officiated by the Rev. Lyle Ewing. In lieu of flowers, Memorials may be made to The Association for Frontotemporal Degeneration (www.theaftd.org). Funeral arrangements have been entrusted to the care of the Thoma/Rich, Lemler Funeral Home in Bluffton. Friends can send online condolences to the family at www.thomarich.com.

The family of Duncan L. White created this Life Tributes page to make it easy to share your memories.

Duncan Lewis White, 81, of Bluffton passed away on Tuesday morning,...

Send flowers to the White family.