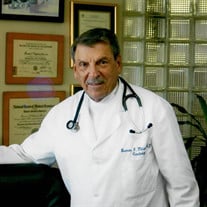 Dr. Ramon J. Villamil, 93, of Bluffton passed away on Sunday evening, March 25, 2018, at River Terrace Estates in Bluffton. Dr. Villamil was born in Bayamon, Puerto Rico on December 03, 1924 to Jose & Flor (Marrero) Villamil. He married Antonia “Toni” Segura on April 8, 1944 in Puerto Rico. She preceded him in death on January 1, 2014. Dr. Villamil served in the United States Army during WWII at the Panama Canal Zone and the Middle Pacific War Theatre. He was honorably discharged from the military. Dr. Villamil graduated from the University of Puerto Rico, Rio Piedras Campus with a BS in Pharmaceutical Sciences in 1950, a BS in Sciences (Pre-Med) in 1953, and a Doctoral in Medicine and Surgery in 1957. He completed his internship at the San Juan City Hospital from 1957-1958. Dr. Villamil completed his Cardiology Fellowship at the Cleveland Clinic Foundation in 1976. For the first five years after graduation, Dr. Villamil’s focus was on General Medicine. The next ten years he focused on Internal Medicine Proctorship in San Juan, Puerto Rico. In 1973, he started his Fellowship in Cardiac Laboratory in Cardiovascular disease at the Cleveland Clinic Foundation for two years, and then one additional year as an associate staff of Dr. F. Mason Sones. Upon moving to the Caylor-Nickel Clinic in Bluffton, IN, he was appointed as Medical Director to cardiovascular laboratory for all invasive procedures. This position he held for sixteen years, the last three he was also a chairman of the Department of Cardiology. Upon retirement from the Caylor-Nickel Clinic in 1990 due to sudden loss of vision, Dr. Villamil returned to Puerto Rico. He had partial recovery of vision and returned to practice in Internal Medicine and Cardiology from 1995-1997, when he returned to Bluffton. Dr. Villamil was issued a Borden Prize at the Medical School in Public Health for his article “Electorcardiogram in Obstructive Cardiomyopathy,” published in 1976. He along with Drs. Lardani and Serrano received the same award in 1978 for an article entitled “Hemodynamics and Coronary Angiography in Idiopathic Hypertrophic Subaortic Stenosis.” During his years of medicine, Dr. Villamil was part of numerous societies, including American Society of Cardiac Angiography, American College of Cardiology, American College of Physicians, American Medical Association, Puerto Rico Medical Association, Section of Internal Medicine of Puerto Rico Medical Association, American Society of Internal Medicine, Indiana State Medical Association, International College of Angiology, Wells County Medical Society and Puerto Rico College of Physicians. Between 1995 and 1997, Dr. Villamil was a consultant Cardiologist at San Juan City Hospital affiliated to University of Puerto Rico School of Medicine. He has resided in Wells County since 1976 and was a member of the St. Joseph Catholic Church. Dr. Villamil enjoyed boating and deep sea fishing until he caught a shark and Toni made him sell his boat. He liked auto racing, especially when he was the driver. He was a golf fanatic participating with the Under the Tree Gang at Parlor City. He had a love of photography and reading, especially medical journals. Survivors include a son, Jose’ E. (Maria) Villamil of Puerto Rico, a daughter, Mary C. (Adolfo) Porrata of Bluffton, siblings; Felix Villamil of Fort Lauderdale, FL., Francisco Villamil of Puerto Rico, Evangeline Russo of Long Island, New York and five grandchildren and nine great-grandchildren. He is preceded in death by his parents and siblings: Manuel Villamil, Carmen Martinez. Mass of Christian Burial will be celebrated at 11:30 a.m. Wednesday, March 28, 2018 at St. Joseph Catholic Church with Msgr. Pius N. IIechukwa officiating. Military honors will be conducted following mass by the United States Army and American Legion Post #111 of Bluffton. Calling hours will take place for two hours prior to service at the church. Preferred memorials are to the Wells County Animal Shelter & Honor Flight of Northeast Indiana. Funeral arrangements have been entrusted to the care of the Thoma/Rich, Lemler Funeral Home in Bluffton. Friends can send online condolences to the family at www.thomarich.com.

The family of Dr. Ramon J. Villamil created this Life Tributes page to make it easy to share your memories.

Send flowers to the Villamil family.