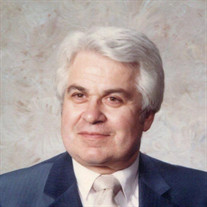 Dr. Byron Kay (B.K.) Poindexter, D.D.S. 86, of Bluffton passed away, Sunday, November 8, 2020 at Parkview Hospital - Dupont in Fort Wayne, IN. B.K. was born in Sandborn, IN on December 27, 1933 to Ives Theodore and Hattie McBride Poindexter. He married Patricia Gayle Hunley in Linton, IN on June 20, 1954. They were married for 66 years. Dr. Poindexter graduated in 1958 from the Indiana University School of Dentistry, Indianapolis. Before their marriage, B.K. and Patty were students at IU-Bloomington, where both of their daughters also earned their degrees. They enjoyed their undergraduate years in Bloomington immensely. Dr. and Mrs. Poindexter also served on the Parents Board for Hillsdale college in Hillsdale, MI, where their sons both attended college. After their marriage, they moved to Indianapolis, where Dr. B.K. attended dental school. Upon his graduation, he moved to Bluffton, whereupon, he began his practice spanning 58 years. Dr. B.K. was very civic-minded and generous with his time. He was actively involved in the following organizations: Member of the First United Methodist Church of Bluffton, serving on the Pastor Parish Committee and he also taught high school and adult Sunday school classes as his children were growing. He was a member of Isaac Knapp Dental Society, Greene County Shrine, Bluffton Masonic Lodge #145, Fort Wayne Scottish Rite, Fort Wayne Mizpah Shrine, BPO Elks Lodge #796, Bluffton Lions Club, Wells County Historical Society, he served as the President of Wells County Crippled Children’s Society and was on the original Wells County Board of Health. In his youth, he was active in the Boy Scouts where he attained the rank of Eagle Scout, an accolade of which he was very proud. He is survived by his wife, Patricia, and one remaining sister, Linda Dee Woodruff (Arthur) of Linton, IN. They had four wonderful children, who also survive: Devon Willey (Don) of Celina, OH; Clay Poindexter (Joan) and Blake Poindexter (Lauriean), both of Bluffton, IN; and Gay Willits (Barry) of Scottsdale, AZ; seven grandchildren: Carson Willey (Katie) of Beavercreek, OH; Michael Wood (Shelly) of Bluffton, IN; Chelsea Poindexter of Bluffton, IN, Nick, Chet and Cal Willits of Scottsdale, AZ. He was proceeded in death by his grandson, Tate Willey. Due to COVID-19, an immediate, private family funeral has been held at the Thoma/Rich, Lemler Funeral Home in Bluffton with private burial at Elm Grove Cemetery following services. In lieu of flowers, please send memorials to The First United Methodist Church of Bluffton, IN and the Wells County Boys and Girls Club. Funeral arrangements have been entrusted to the care of Thoma/Rich, Lemler Funeral Home in Bluffton. Friends can send online condolences to the Poindexter family at www.thomarich.com.

The family of Dr. B.K. Poindexter, D.D.S. created this Life Tributes page to make it easy to share your memories.