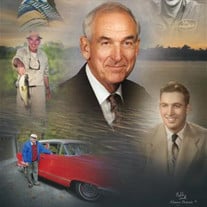 Doyle Robert Stern, 87 of Bluffton passed away on Thursday morning, January 16, 2020 at Bluffton Regional Medical Center. Doyle was born on June 12, 1932 in Huntington County, Indiana to Arthur Lloyd & Ester M. (Emley) Stern. He graduated from Lancaster High School in 1950 and was the owner/operator of Stern’s Auto Body Repair for 45 years, retiring in 1995. He was a Scout Leader for Troop 150 in Bluffton, a member and past president of the Bluffton Rotary Club along with serving on the Lancaster Township Advisory Board for 12 years. Doyle married the love of his life Carol N. (Barger) Stern on September 7, 1952 in Bluffton and they celebrated 67 years together. They spent their lives raising their sons, enjoying friends and family, and supporting their community. As a loyal and lifelong member of the First United Methodist Church for over 74 years, he participated in numerous mission trips travelling throughout the United States, Africa and Jamaica. He was handy and skilled in many things and never met a challenge he couldn’t conquer. As an avid sports fan, Doyle looked forward to cheering on his Dodgers and Purdue Boilermakers at every opportunity. He knew everything about automobiles and there wasn’t one he couldn’t repair. Survivors include his wife Carol of Bluffton along with children; Tim R. (Libby) Stern of Rockford, MI., Mark N. (Suzanne) Stern of Kewanee, Il. and 4 grandchildren; Glen (Alexis) Stern of Detroit, Adam (Erin) Stern of Pittsburg, Ashley (Kyle) Morey of Geneseo, Il. and Ali Stern of Atkinson, Il. Doyle is also survived by his siblings; Ronald W. (Sandy) Stern of Indianapolis, Diane Tayrien of Orlando, Fl. and in-laws, Barbara Barger of Bluffton and Cora Barger of Decatur. Doyle is preceded in death by a brother and sister-in-law, Lloyd (Joan) Stern. Funeral services for Doyle will be held at 10:30 A.M. on Monday (Jan. 20, 2020) at the First United Methodist Church in Bluffton. Rev. Larry Ray and Rev. Sherrie Drake will officiate. Burial will follow at Elm Grove Cemetery in Bluffton. Calling hours will be held from 1 P.M. to 7 P.M. on Sunday (Jan. 19,2020) at the Thoma/Rich, Lemler Funeral Home in Bluffton and one hour prior to the service at the church. Memorials may be made in Doyle’s memory to the First United Methodist Church or Family LifeCare of Berne or Wells County Boys & Girls Club. Funeral arrangements have been entrusted to the care of the Thoma/Rich, Lemler Funeral Home in Bluffton. Friends can send online condolences to the family at www.thomarich.com.

The family of Doyle R. Stern created this Life Tributes page to make it easy to share your memories.

Doyle Robert Stern, 87 of Bluffton passed away on Thursday morning,...

Send flowers to the Stern family.